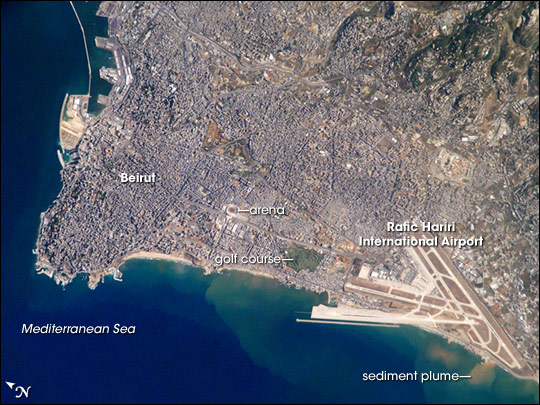 The capital of Lebanon, Beirut, is located along the southeastern shoreline of the Mediterranean Sea. The metropolitan area is built on a small peninsula composed mainly of sedimentary rock deposited over the past 100 million years or so. The growth of the city eastwards is bounded by foothills of the more mountainous interior of Lebanon (image upper right). While this sedimentary platform is stable, the country of Lebanon is located along a major transform fault zone. Transform faults are places where tectonic plates are moving against each other laterally, in this case the African Plate on the west and the Arabian Plate to the east. This tectonic activity creates an earthquake hazard for the country. The Roum Fault, one of the fault strands that is part of the transform boundary, is located directly to the south of the Beirut metropolitan area.

The Beirut area has a long human history. It has been an urban center for the past 5,000 years. Throughout much of that time, the region has been the focus of both military and economic conflicts among neighboring city-states. Conflict between Lebanon and Israel in 2006 resulted in environmental damage from an oil spill that affected local beaches. Beach contamination from the oil spill is not visible in this astronaut photograph taken in 2007. Other distinctive features visible in this astronaut photograph include the Rafic Hariri Airport at image lower right, the city sports arena at image center, and several areas of green and open space, including a large golf course at image center. Also visible in the image are several plumes of sediment along the coastline; the most striking plumes are near the airport. The general lack of vegetation in the airport may allow more soil transport by surface water runoff or wind.

Astronaut photograph ISS016-E-8436 was acquired on October 26, 2007, with a Kodak 760C digital camera using an 800 mm lens. The image was taken by the Expedition 16 crew, and it is provided by the ISS Crew Earth Observations experiment and the Image Science & Analysis Laboratory, Johnson Space Center. The image in this article has been cropped and enhanced to improve contrast. The International Space Station Program supports the laboratory to help astronauts take pictures of Earth that will be of the greatest value to scientists and the public, and to make those images freely available on the Internet. Additional images taken by astronauts and cosmonauts can be viewed at the NASA/JSC Gateway to Astronaut Photography of Earth. Caption by William L. Stefanov, NASA-JSC.

The capital of Lebanon, Beirut, is located along the southeastern shoreline of the Mediterranean Sea. The metropolitan area is built on a small peninsula composed mainly of sedimentary rock deposited over the past 100 million years or so. The growth of the city eastwards is bounded by foothills of the more mountainous interior of Lebanon.

Reflective roofing materials and dark asphalt streets outline the urban grid pattern of Uruguay’s capital city, Montevideo, in this astronaut photograph. The city may be viewed as a precursor of a global population shift from dominantly rural to urban environments, a shift the United Nations estimates will occur by 2030. Nearly half of Uruguay’s total population now lives in the Montevideo metropolitan area. Located on the southern coastline of Uruguay along the Rio de la Plata, Montevideo Bay provides an important harbor and port facilities for transport of South American agricultural products.

The distinctive red brick roof tiles of buildings in Ankara, Turkey, are the most striking feature in this astronaut photo from April 11, 2009.