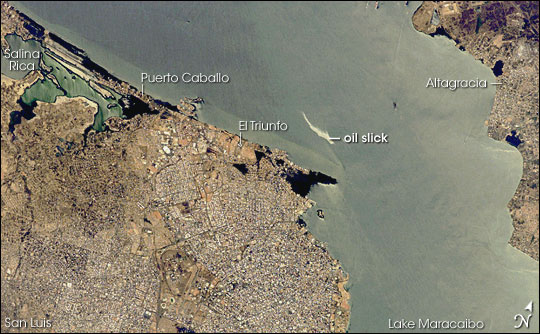 This astronaut photograph depicts the narrow (6-kilometer-wide) strait between Lake Maracaibo to the south and the Gulf of Venezuela to the north. This brackish lake in northern Venezuela is the largest in South America. The lake and its small basin sit on top of a vast reservoir of buried oil deposits, first tapped in 1914. Venezuela is now the world’s fifth largest oil producer. The narrow strait has been deepened to allow ocean-going vessels access to the lake for oil transport.

Shipping is one of the main sources of pollution in the lake; pollution enters the lake when when ships dump ballast and other waste. An oil slick, likely related to bilge pumping, can be seen as a bright streak northeast of El Triunfo in this image from February 23, 2007. Other sources of pollution to the lake include underwater oil pipeline leakage, untreated municipal and industrial waste from coastal cities, and runoff of chemicals from surrounding farm land. Deepening the narrow channel for shipping has also allowed saltwater intrusion into the lake, negatively affecting lake life.

Since the discovery of oil, cities like Maracaibo have sprung up along the northwestern coastline of the lake. With satellite cities such as San Luis and El Triunfo (visible in this view), greater Maracaibo has a population of about 2.5 million. Just outside the lower margin of the picture, a major bridge spans the narrows pictured here, connecting cities such as Altagracia (top right) to Maracaibo.

Featured astronaut photograph ISS014-E-14618 was acquired February 23, 2007, with a Kodak 760C digital camera using a 400 mm lens, and is provided by the ISS Crew Earth Observations experiment and the Image Science & Analysis Laboratory, Johnson Space Center. The image in this article has been cropped and enhanced to improve contrast. The International Space Station Program supports the laboratory to help astronauts take pictures of Earth that will be of the greatest value to scientists and the public, and to make those images freely available on the Internet. Additional images taken by astronauts and cosmonauts can be viewed at the NASA/JSC Gateway to Astronaut Photography of Earth.