Fires Across the Western United States 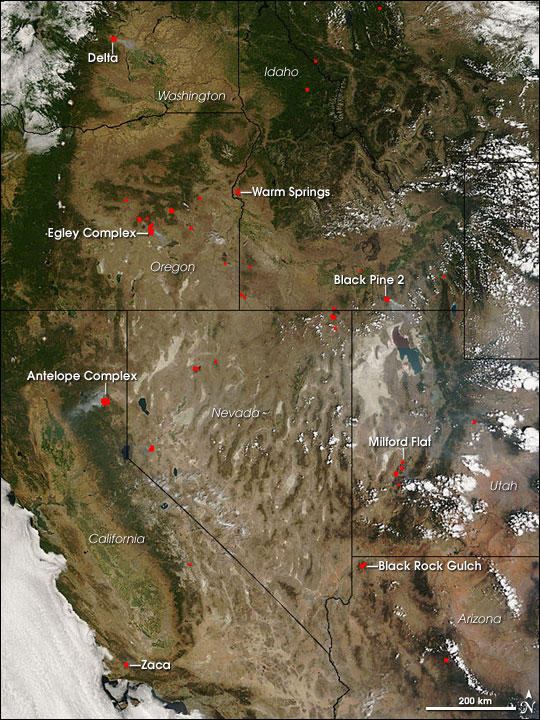 This image of the West was captured by the Moderate Resolution Imaging Spectroradiometer (MODIS) on NASA’s Terra satellite on Sunday, July 8. Places where MODIS detected actively burning fires are marked in red. Some of the largest blazes are labeled. Utah’s Milford Flat was the largest; according to the July 9 morning report from the National Interagency Fire Center, the blaze was more than 280,000 acres, having grown more than 124,000 acres in the previous 24 hours.

The fires have destroyed homes, forced evacuations, shut down trains and highways, and killed several people. Weather conditions were not expected to improve significantly across much of the area for several days, with hot temperatures and dry thunderstorms (lightning and winds, but little rain) likely in many places. Nearly the entire western United States was experiencing some level of drought as of July 3, according to the U.S. Drought Monitor. The drought had reached the “extreme” category in southern California and western Arizona, and ranged from moderate to severe across most of the rest of the Southwest and Great Basin.

The large image provided above has a spatial resolution (level of detail) of 500 meters per pixel. The MODIS Rapid Response Team provides twice-daily images of the region in additional resolutions and formats, including an infrared-enhanced version that makes burned terrain appear brick red.