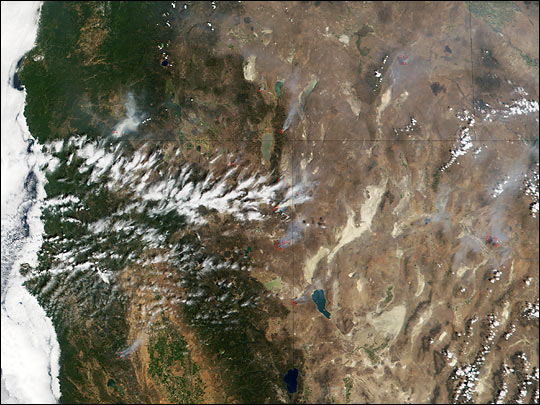 Fire season is underway in the northwestern United States as more than 21,000 firefighters have been mobilized to battle 42 major wildfires that have consumed over half a million acres (as of August 16, 2001) across the region. Weather conditions remain hot and dry as winds ranging from 15 to 35 miles per hour spread the flames.

NASA’s Terra satellite passed over Oregon, California, and Nevada on Saturday, August 11, 2001, and the satellite’s Moderate-resolution Imaging Spectroradiometer (MODIS) detected several fires burning across those states. More than a dozen fires, which are indicated by red boxes, can be seen in the image sending out plumes of smoke blowing toward the northeast.

The National Interagency Fire Center (NIFC) reports that the fires are burning in 10 western states. Most of the blazes were ignited by lightning strikes. Wildfires have scorched about 2.3 million acres in the United States this year, as compared to about 5 million acres that had been consumed by this time last year.