A CLAMS-Eye View of Earth 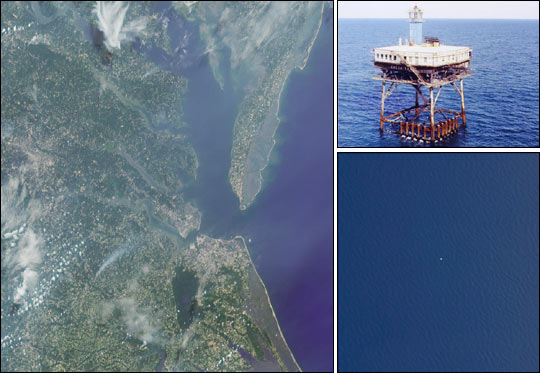 Scientists representing the new-generation Earth Observing instruments aboard NASA’s Terra satellite gathered at the space agency’s Wallops Island facility to study the atmosphere from multiple perspectives simultaneously.ÿ The intensive field campaign, called CLAMS (Chesapeake Lighthouse and Aircraft Measurements for Satellites), is a key step in the effort to better understand, and ultimately to predict, changes in Earth’s climate. CLAMS aimed at measuring pollution and other particles in a volume of air over ocean, and at the same time characterizing the way the dark water surface below reflects sunlight back toward space. The experiments continued through most of July and early August 2001.

Data were collected at the Chesapeake Lighthouse, a platform in the Atlantic Ocean 25 kilometers off the Virginia coast, and by six instrumented aircraft, including NASA’s high-altitude ER-2 aircraft and the University of Washington’s Convair-580. At the same time, the Multi-angle Imaging SpectroRadiometer (MISR), the MODerate resolution Imaging Spectroradiometer (MODIS), and the Clouds and the Earth’s Radiant Energy System (CERES) instruments on Terra observed the scene from space.

The satellite instruments have been producing frequent, global, remote-sensing observations of Earth with unprecedented detail since early 2000. The highly coordinated aircraft and lighthouse measurements made during CLAMS provide “ground truth,” allowing the satellite scientists to critically examine and improve their interpretation of the global data.

The left image in this montage is a true-color rendition of the Chesapeake region as seen by the 60-degree backward-viewing MISR camera, near local noon on July 17, 2001 (Terra orbit 8407). The above-water portions of the Chesapeake Bay Bridge-Tunnel, which connects Cape Charles and Norfolk, Virginia, are faintly visible to the right of image center. The Chesapeake Lighthouse is located in the Atlantic Ocean, due east of Cape Henry at the southern end of Chesapeake Bay, though it is not visible at the MISR resolution. The lower right image is a downward-looking (nadir) view of a 4-kilometer wide patch of ocean obtained near local noon on July 17 by the AirMISR instrument (an aircraft version of the satellite MISR) that flies at an altitude of 20 kilometers aboard the ER-2. The spatial resolution of the AirMISR image is about 35 times finer than that of the simultaneous MISR view; the sea-surface texture is faintly visible across the AirMISR scene, and the Chesapeake Lighthouse itself shows up as a small white patch near the center of the image. The upper right image was taken from a helicopter, as it approached the Lighthouse from the north side.

For more about CLAMS, look here 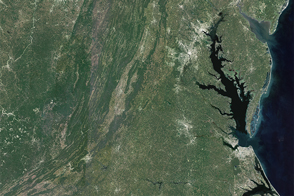 It takes a lot of data and some patient, creative processing to make an image of the world’s third largest estuary system.