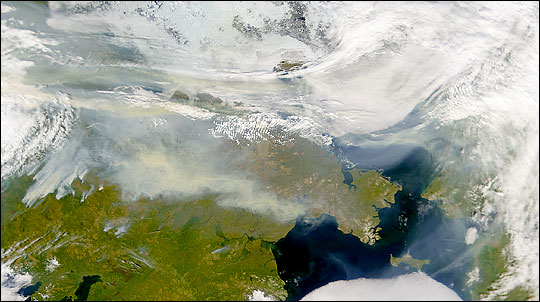 A large number of forest fires in Siberia are emitting vast pall of smoke that is spreading from the interior of Asia to Alaska and the Pacific Northwest. So far this summer, tens of thousands of acres have burned in Siberia’s boreal forests. The image above, taken by the Sea-viewing Wide Field-of-view Sensor (SeaWiFS) on August 5, 2001, shows smoke from the fires (left) spreading across northeastern Russia, and over the Bering Strait and Alaska. A later image, also acquired by SeaWiFs, showed haze which probably originated from these fires off the coast of British Columbia and Washington State.

Fire plays an important role in the ecosystems of the northern forests. Some tree species, such as jack pine and aspen, thrive in newly-burned areas. The jack pine even depends on fire to release seeds from its resinous pinecones. After 30 years the taller black spruce begin to take over. After 100 years or so, enough dead trees and fallen needles have accumulated on the forest floor to fuel a new wave of fires.

For more information, read Evolving in the Presence of Fire.