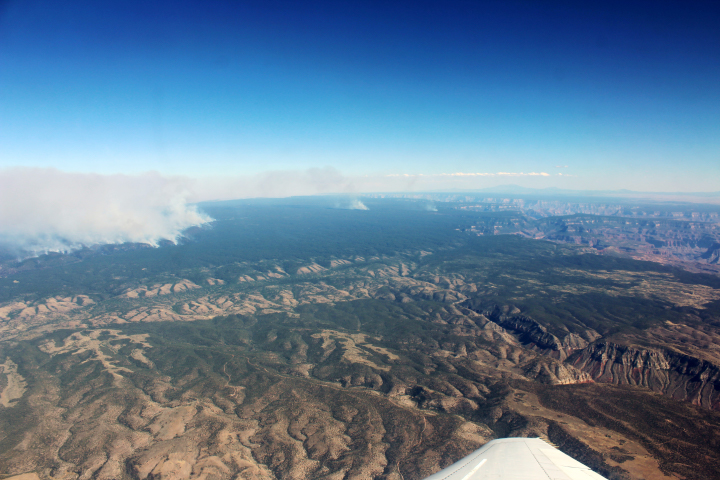 The Castle Fire is not extraordinary as wildfires go, but it is significant for scientists.

As of August 21, 2019, the lightning-caused fire had burned through more than 19,000 acres of northern Arizona in and around Kaibab National Forest. Fire managers from the U.S. Forest Service have mostly allowed the fire to run its natural course, as wildfires can help clear brush, dead trees, and invasive species that can affect the long-term health of a forest.

The fire also presented an opportunity for important research. On August 12-13, researchers flew instrumented aircraft through the smoky skies to learn what chemicals were rising in the plumes and how those compounds evolve and disperse over the course of the fire’s lifespan. The data collected will help researchers gain a better understanding of fire behavior and could help improve air quality forecasting.

“There are hundreds, even thousands of different chemicals emitted from fires,” said Rebecca Hornbrook, an atmospheric chemist from the National Center for Atmospheric Research. “Many of the organic chemicals emitted contribute to the formation of ozone and additional particles, which can contribute to poor air quality even when the majority of the obvious smoke has dissipated.”

Hornbrook has been taking part in a field campaign called Fire Influence on Regional to Global Environments and Air Quality, or FIREX-AQ. In the campaign, jointly operated by NOAA and NASA, researchers are using satellites and in situ instruments mounted on several aircraft to collect data on the chemical composition of wildfire smoke. The campaign began in Boise, Idaho, on July 23, and researchers also have traveled to eastern Washington and northern Arizona. 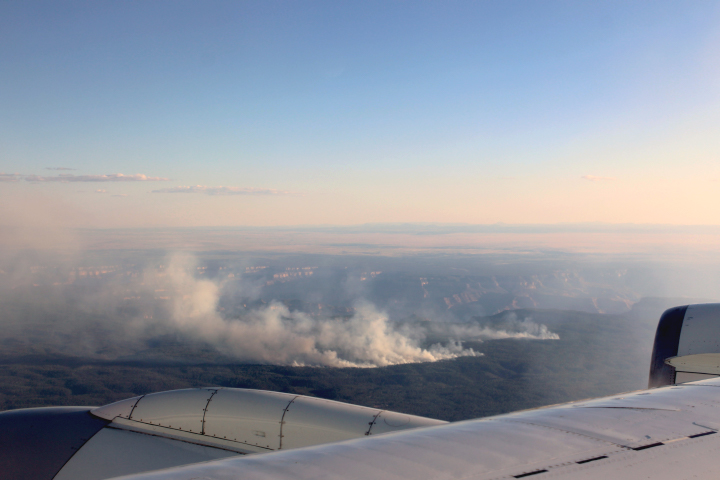 These photographs of the Castle Fire were shot by Hornbrook during a FIREX-AQ flight on August 13. The smoke was visible from the north and south rims of the Grand Canyon, which is visible in both photos.

“While the views from this flight were very impressive, our primary interest in the fire location has to do with the type of fuels burned,” said Hornbrook, who works with the Trace Organic Gas Analyzer, an instrument that measures volatile organic compounds. “The fuel details on the fires we study will become critical for the later analysis, when we compare emissions from fires in different regions and from different fuel types.”

For instance, the Castle Fire burned through a forest dense with mixed conifers but also dead and downed trees. Earlier in August 2019, the team observed the William Flats fire in eastern Washington, which burned through short grass, bitterbrush, ponderosa, and mixed conifer.

In mid-August, the field campaign began working out of Salina, Kansas, in order to study smoke from agricultural fires in the U.S. southeast. The campaign will end in mid-September.