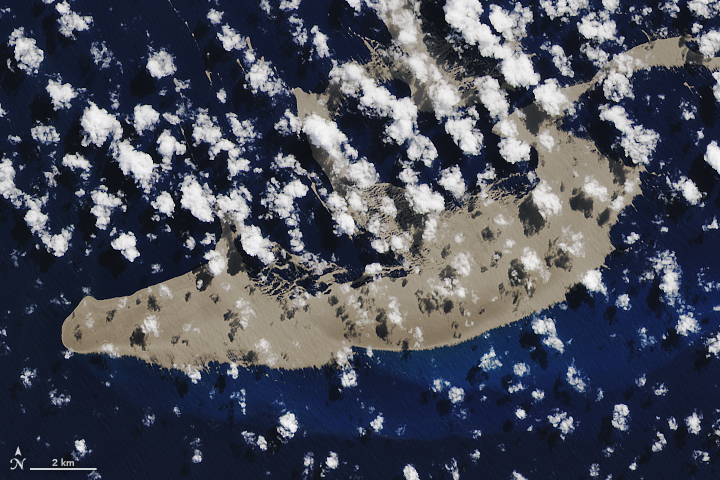 Volcanoes have a lot of dramatic ways to announce their presence: thick plumes of ash and steam; rivers and lakes of molten lava; rockfalls and lahars; earthquakes; even the sudden rising of an island above the water line. One of the more subtle and rarely observed displays is the pumice raft.

Many of the world’s volcanoes are shrouded by the waters of the oceans. When they erupt, they can discolor the ocean surface with gases and debris. They also can spew masses of lava that are lighter than water. Such pumice rocks are full of holes and cavities, and they easily float. 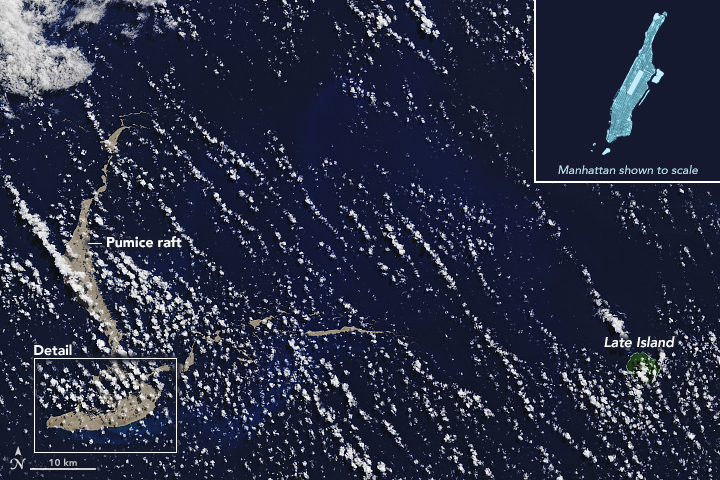 On August 13, 2019, the Operational Land Imager on Landsat 8 acquired natural-color imagery of a vast pumice raft floating in the tropical Pacific Ocean near Late Island in the Kingdom of Tonga. NASA’s Terra satellite detected the mass of floating rock on August 9; the discolored water around the pumice suggests that the submarine volcano lies somewhere below. By August 13, the raft had drifted southwest. As of August 22, the raft had moved north again and was a bit more dispersed, but still visible.

The Volcano Discovery web site reported that it received an email from a sailor on August 7, 2019, about clouds of smoke on the horizon in the direction of Fonualei volcano. According to a bulletin from the Smithsonian’s Global Volcanism Program (GVP), sailors began reporting sightings of the pumice raft by August 9. The crew of the catamaran Roam encountered the pumice and provided a detailed report on Facebook on August 15. The sailors described a “rubble slick made up of rocks from marble to basketball size such that water was not visible,” as well as a smell of sulfur.

Volcanologists at the Smithsonian believe the evidence points to an unnamed submarine volcano near Tonga at 18.325° South, 174.365° West. The last report of an eruption at the site occurred in 2001, and the summit of the seamount is believed to stand about 40 meters (130 feet) below the water line.