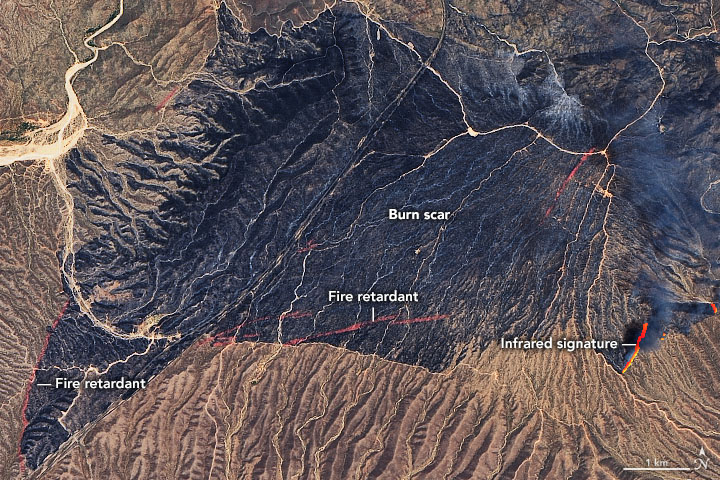 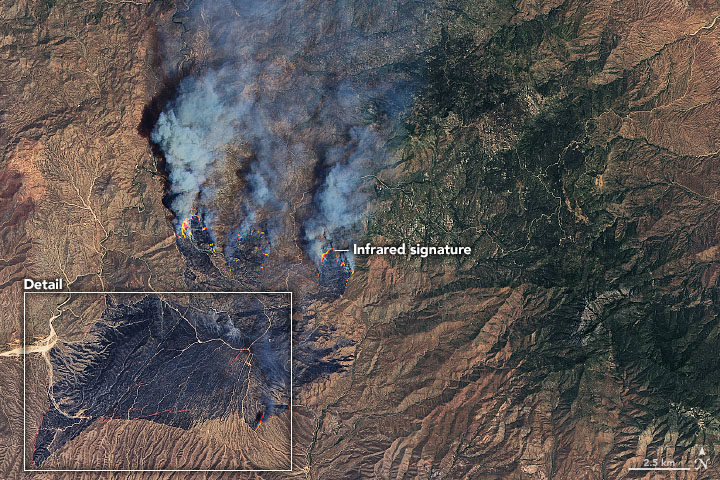 On the afternoon of June 13, 2020, a vehicle fire near the intersection of Bush Highway and State Route 87 ignited the brush and grass nearby. By June 16, nearly 65,000 acres (100 square miles or 260 square kilometers) northeast of Phoenix, Arizona, had burned, making the Bush Fire the largest in the state this year and the largest in the United States right now.

According to firefighting and forest management agencies in the region, the fire was burning through tall grass and brush in and around the Tonto National Forest. As of midday on June 16, more than 400 firefighters were battling the flames with helicopters, fire engines, bulldozers, and airplanes. The fire was completely uncontained amid hot, dry, and windy conditions. More than 1,500 people had been evacuated from the Tonto Basin and Sunflower communities.

The satellite images above show the Bush Fire burn scar and some active fire fronts as they appeared on June 14, 2020. The images were acquired by the Operational Land Imager (OLI) on Landsat 8. The images blend natural-color (OLI bands 4-3-2) with the thermal infrared signature of actively burning fires (bands 6 and 5). This combination makes it easier to see still-active fire lines through the smoke. Scientists from the University of Wisconsin assembled this short animation of the fire spreading at night as observed by the NOAA-NASA Suomi NPP satellite.

The red lines across the detailed image above are fire retardant that was dropped to keep the fire from advancing toward settled areas. This video shows one of the airborne retardant drops, while this closeup demonstration shows the impact and spread of the fluid slurry as it reaches the ground.

Fire season typically peaks in the U.S. Southwest in June and July. In a seasonal forecast issued on June 1, the National Interagency Fire Center predicted “above normal significant large fire potential” in the region, especially Arizona. Temperatures have been 1 to 6 degrees Fahrenheit above normal for much of the past two months, and rainfall has been below normal.