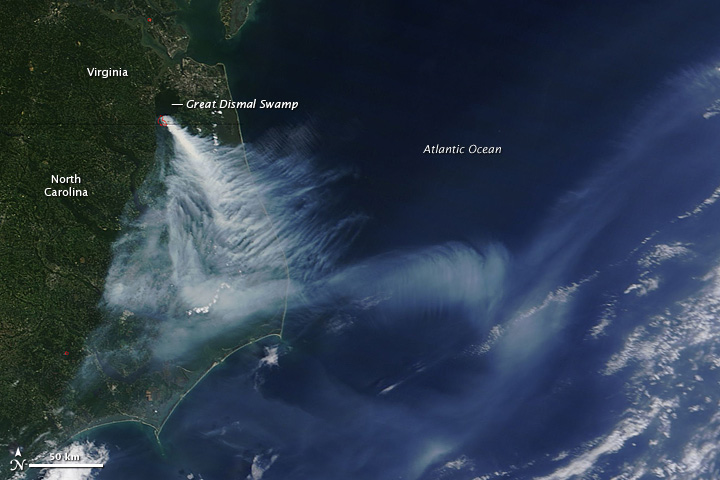 Though the sun was shining, those vacationing on the beaches in the Outer Banks may have experienced a hazy day. Smoke from southern Virginia’s Lateral West fire drifted south on August 10, 2011, fanning out over coastal North Carolina. The previous day, smoke had been blowing north into the Washington, D.C. region.

The Moderate Resolution Imaging Spectroradiometer (MODIS) on NASA’s Terra satellite acquired this image on August 10. The fire is outlined in red.

Lightning started the fire on August 4 in dry grass and brush in the Great Dismal Swamp National Wildlife Refuge. The fire is burning in pine forest, grass, brush, dead fuel left from a previous fire, and dry organic soil. As of late on August 9, the fire had consumed 3,200 acres. Because of the difficulty in fighting this type of fire, it will likely burn until at least six inches of rain falls in a short period of time, said fire managers.

Perhaps the greatest threat posed by the Lateral West Fire is the dense smoke is it producing. Smoke can damage human health. It irritates the eyes and respiratory system and causes low visibility.