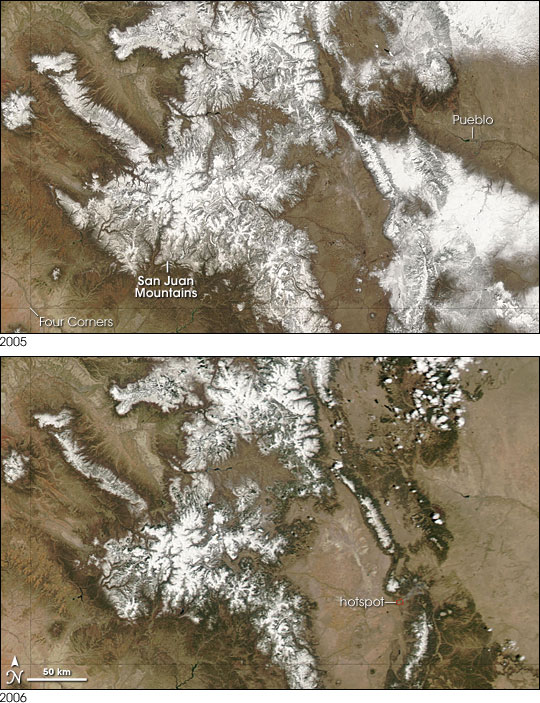 Yearly snow cover can fluctuate widely over Earth’s mountain ranges. Snowfall amounts, temperatures, cloud cover, and wind are just some of the factors that affect snow cover. Another factor, however, may sound surprising: dust. A study published in 2007 found that dust plays a significant role in the duration of snow cover in the San Juan Mountains of southwestern Colorado. Thomas Painter of the National Snow and Ice Data Center/University of Utah and his collaborators found that the area experienced more dust events in the spring of 2006, and the snow melted earlier as a result.

Dust settling on the snow darkens the surface and absorbs more sunlight than clean, bright snow does. Sprinkled with dust, the snow warms and melts more rapidly. The winter and spring of 2005 saw only four dust events blow over the San Juans, but the winter and spring of 2006 saw eight. Model simulations and observations indicated earlier snow melt, by up to a month in some places.

Not only were dust events more frequent and heavier in 2006, but weather conditions colluded to maximize the impact of the dust. Less snow fell after the dust events and skies were less cloudy, which meant that the dust that settled on the San Juan Mountains’s snowpack stayed exposed to the Sun. These weather conditions enhanced the dust’s melting potential.

The researchers found that the dust affecting San Juan snow cover came not from the immediate vicinity but from the Colorado Plateau, including the Four Corners region where the borders of Utah, Colorado, New Mexico, and Arizona intersect. Since the late nineteenth century, the American Southwest has seen significant land-use changes, including the expansion of grazing, recreational use, and agriculture. These land-use changes have disturbed desert soils and increased windblown dust.