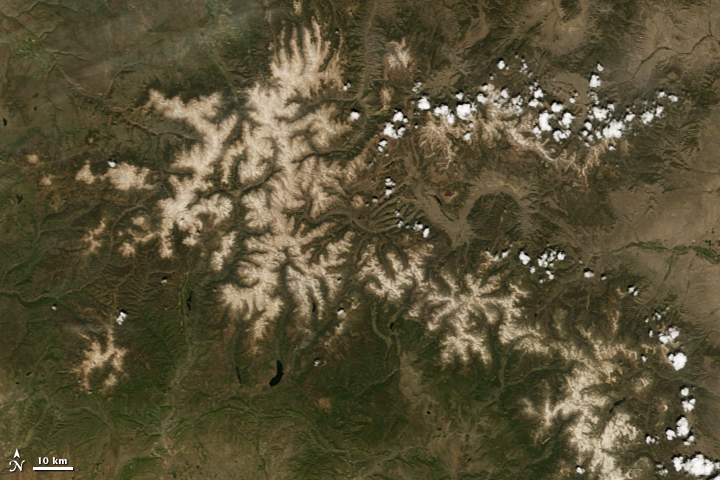 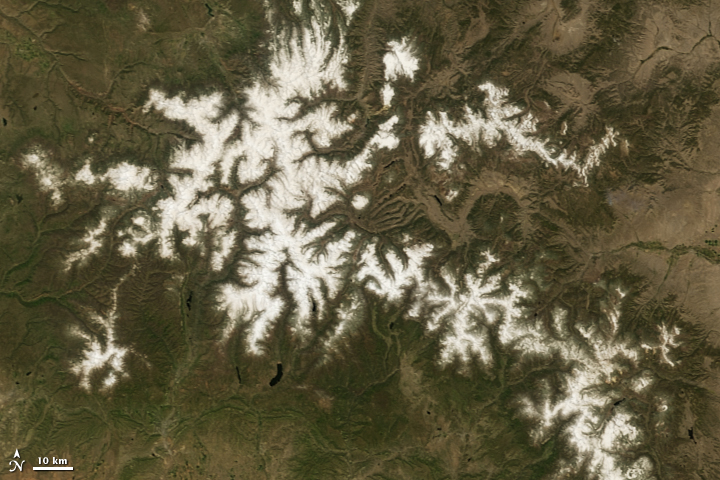 Each winter and spring, airborne dust from the Colorado Plateau and the Great Basin regions settles on the snow cover in the San Juan Mountains of southwestern Colorado. The dust increases the absorption of solar radiation, which dramatically accelerates snow melt. Winter and spring of 2008 in the Colorado River Basin were particularly dusty, with a record-breaking nine airborne dust events. But that record was broken in the winter and spring of 2009 with a landmark 12 events—contributing to a noticeably earlier snow melt.

The Moderate Resolution Imaging Spectroradiometer (MODIS) on NASA’s Terra satellite captured the top image on May 18, 2009, and the bottom image on May 31, 2008. In contrast to the bright white snow cover on the San Juan Mountains in 2008, the snow cover on the same mountains ranges in color from pale beige to dull brown in 2009. The brownish color of the snow in May 2009 is largely due to dust on the snow surface. Even though persistent cloud cover minimized the melting effect of solar radiation in early 2009, more dust caused the snow to melt earlier than it had the previous spring.

Researchers including Tom Painter, cryospheric scientist and director of the Snow Optics Laboratory at the University of Utah, Salt Lake City, continue to analyze the data to determine exactly how much earlier the 2009 snow melt occurred. In the meantime, Painter used MODIS data to measure changes in the snow cover reflectance—less reflectance implies more dust, more absorbed solar radiation and more melting. He found that in 2009, dusty snow absorbed more than twice as much solar radiation than the cleaner snow of 2008.

Painter found that the connection between dusty snow and early melt was apparent in the seven years that MODIS had been collecting data. For example, this Image of the Day shows dust’s effect on snowmelt between 2005 and 2006, which saw four and eight dust events, respectively. Model simulations and observations showed that as a result, snow melt in 2006 occurred up to a month earlier in some places.

Painter and his colleagues conclude that the present-day snow cover and hydrology of the American West have changed since the nineteenth century, independent of climate change. The changes, such as the timing of the spring/summer melt documented in these images, are due to dust generated when the semi-arid landscapes of the western United States are disturbed by agriculture and grazing animals. With the drying and warming projected for the desert southwestern United States and other deserts of the globe as a result of global warming, dust is likely to have an increasing impact on critical water resources in places like the West.