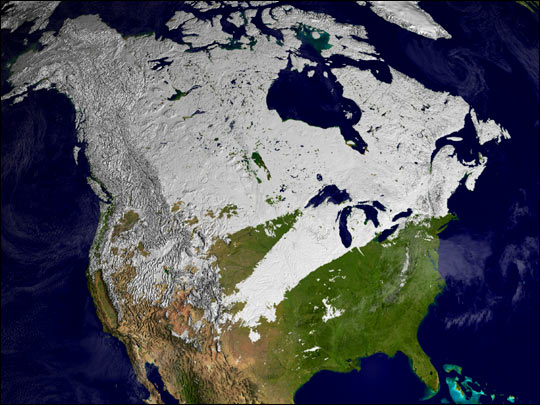 The Moderate Resolution Imaging Spectroradiometer (MODIS), flying aboard NASA’s Terra and Aqua satellites, measures snow cover over the entire globe every day, cloud cover permitting. At spatial resolutions of up to 500 meters per pixel, MODIS allows scientists to distinguish between snow and clouds, both of which appear bright white when seen from above at true-color wavelengths.

Snow cover is a critical water resource in many areas. More than 75 percent of the water for human consumption and irrigation in the western United States comes from snow melt runoff. Scientists use satellite data on the extent of snow cover, along with other information, to estimate how much water is contained within a given snow pack. This information is essential for more efficiently managing reservoirs as well as predicting where and when floods are likely to occur. Snowmelt runoff from the Sierra Nevada Mountains constitutes a large component of the water supply for California.

The image above shows snow cover (white pixels) across North America from February 2-9, 2002. Click the links above to access time series animations showing changes in snow cover during the winter of 2001-02. As you play the movies, notice how snow cover begins to build up in the early fall and melts by late spring in the Northern Hemisphere.