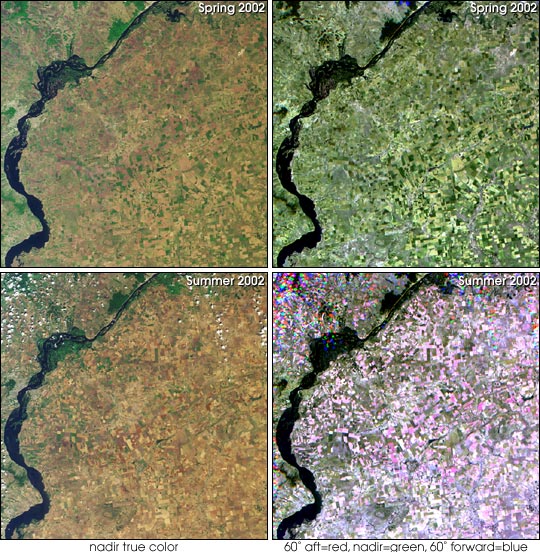 Russia’s Saratov Oblast (province) is located in the southeastern portion of the East-European plain, in the Lower Volga River Valley. Southern Russia produces roughly 40 percent of the country’s total agricultural output, and Saratov Oblast is the largest producer of grain in the Volga region. Vegetation changes in the province’s agricultural lands between spring and summer are apparent in these images acquired on May 31 and July 18, 2002 (upper and lower image panels, respectively) by the Multi-angle Imaging SpectroRadiometer (MISR).

The left-hand panels are natural color views acquired by MISR’s vertical-viewing (nadir) camera. Less vegetation and more earth tones (indicative of bare soils) are apparent in the summer image (lower left). Farmers in the region utilize staggered sowing to help stabilize yields, and a number of different stages of crop maturity can be observed. The main crop is spring wheat, cultivated under non-irrigated conditions. A short growing season and relatively low and variable rainfall are the major limitations to production. Saratov city is apparent as the light gray pixels on the left (west) bank of the Volga River. Riparian vegetation along the Volga exhibits dark green hues, with some new growth appearing in summer.

The right-hand panels are multi-angle composites created with red band data from MISR’s 60-degree backward, nadir and 60-degree forward-viewing cameras displayed as red, green and blue respectively. In these images, color variations serve as a proxy for changes in angular reflectance, and the spring and summer views were processed identically to preserve relative variations in brightness between the two dates. Urban areas and vegetation along the Volga banks look similar in the two seasonal multi-angle composites. The agricultural areas, on the other hand, look strikingly different. This can be attributed to differences in brightness and texture between bare soil and vegetated land. The chestnut-colored soils in this region are brighter in MISR’s red band than the vegetation. Because plants have vertical structure, the oblique cameras observe a greater proportion of vegetation relative to the nadir camera, which sees more soil. In spring, therefore, the scene is brightest in the vertical view and thus appears with an overall greenish hue. In summer, the soil characteristics play a greater role in governing the appearance of the scene, and the angular reflectance is now brighter at the oblique view angles (displayed as red and blue), thus imparting a pink color to much of the farmland and a purple color to areas along the banks of several narrow rivers. The unusual appearance of the clouds is due to geometric parallax which splits the imagery into spatially separated components as a consequence of their elevation above the surface.

The Multi-angle Imaging SpectroRadiometer observes the daylit Earth continuously from pole to pole, and views almost the entire globe every 9 days. These images cover an area of about 173 kilometers x 171 kilometers.

Southern Russia produces roughly 40 percent of the country’s total agricultural output, and Saratov Oblast is the largest producer of grain in the Volga region. Vegetation changes in the province’s agricultural lands between spring and summer are apparent in these images acquired on May 31 and July 18, 2002 (upper and lower image panels, respectively) by the Multi-angle Imaging SpectroRadiometer (MISR).