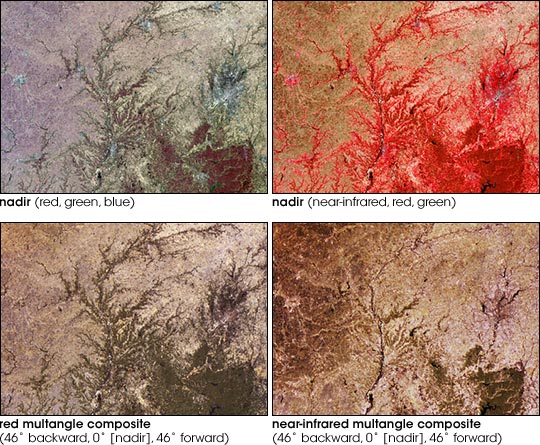 Vegetation across southeast Illinois and central Indiana is shown in this set of multispectral and multiangle images from the Multi-angle Imaging SpectroRadiometer (MISR). Across the center of the image area, the Wabash River runs southward, and in some places corresponds with the Illinois-Indiana border. The White River flows through the city of Indianapolis (to the right of image center), and into Monroe Lake (a dark-colored reservoir at bottom-right). The majority of these fertile lands are used to grow crops, with woodlands present along the rivers and in the rolling hills of South Indiana, indicated in the lower right-hand portion of the images.

The top-left panel is a natural color image from MISR’s nadir camera, and the top-right panel is false-color image, also from MISR’s nadir camera, but displaying data from MISR’s near-infrared, red and green bands as red, green and blue, respectively. Living vegetation is highly reflective at near-infrared wavelengths and so appears in red hues in the false-color image. The lower-left panel is a multi-angular composite in which data from the red band of MISR’s 46° backward, nadir, and 46° forward viewing cameras are displayed as red, green and blue, respectively. The lower-right panel displays near-infrared band data in the same configuration from the same cameras. Color variations in the angular composites serve as a proxy for changes in angular reflectance, which are in turn influenced by the vegetation structure, terrain, soil type, and the solar illumination conditions.

When MISR captured this image on April 5, 2004, areas with strongest near-infrared reflectance corresponded with wooded areas, or with the perimeters of cities, while the croplands on the Illinois side of the Wabash River had yet to undergo vigorous springtime growth. On the Indiana side of the Wabash River, a large tract of forested land is situated about 70 kilometers south of Indianapolis, and appears in dark green hues in both the red and the near-infrared angular composites, indicating that it is more reflective in the nadir view than at the off-nadir angles. This can occur if the underlying soil is brighter than the vegetation at both wavelengths. However, many forested areas that appear in dark green hues in the red-band angular composite exhibit more neutral tones in the near-infrared angular composite. This suggests greater near-infrared reflectivity in the nadir view in those areas, possibly due to enhanced abundance of understory vegetation.

The Multiangle Imaging SpectroRadiometer observes the daylit Earth continuously and every 9 days views the entire globe between 82° north and 82° south latitude. The MISR Browse Image Viewer provides access to low-resolution true-color versions of these images. These data products were generated from a portion of the imagery acquired during Terra orbit 22868. The panels cover an area of about 235 kilometers x 170 kilometers, and utilize data from blocks 58 to 59 within World Reference System-2 path 22.