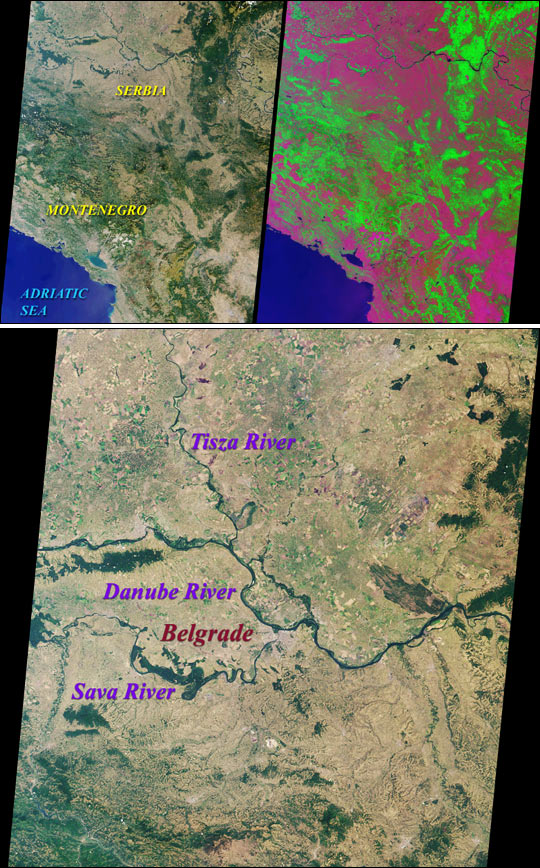 These Multi-angle Imaging Spectroradiometer (MISR) nadir camera images of Yugoslavia were acquired on July 28, 2000 during Terra orbit 3248. On the upper left left is a 'true color' (blue, green, red) image. Vegetation, which covers much of the land area, appears green because chlorophyll molecules absorb more blue and red light than green light. An independent method of detecting vegetation is to use the ratio of brightness in the near-infrared, where vegetation is typically bright as a result of reflection from the plants' cell walls, to the brightness in the red. In the upper right 'false color' image, this ratio has been substituted for the green band data, resulting in a representation that accentuates the land's vegetation.

Yugoslavia is comprised of the Republics of Serbia and Montenegro. Serbia is over six times larger than Montenegro, and together they cover an area roughly comparable to the state of Kentucky. The northern part of Serbia contains fertile plains and a temperate continental climate, with gradual transitions between the seasons. Montenegro is more mountainous, and can experience heavy snowfall during the cold winters. About 10 kilometers from the Adriatic coast is Lake Skadar, the largest lake in the Balkans. Two-thirds of this lake belongs to Montenegro and one-third to Albania.

The lower image is a higher resolution view of the region around the Yugoslavian capital city of Belgrade, highlighting some of the major rivers in the area. The international roads and railways passing through Yugoslavia's river valleys constitute the shortest link between Western and Central Europe on the one side, and the Middle East, Asia, and Africa on the other. Hence the geopolitical importance of this country's territory. The geopolitical changes throughout its history have put Yugoslavia in the worldwide spotlight, culminating most recently in a popular uprising and a newly elected government.

Wetlands of the Gulf Coast