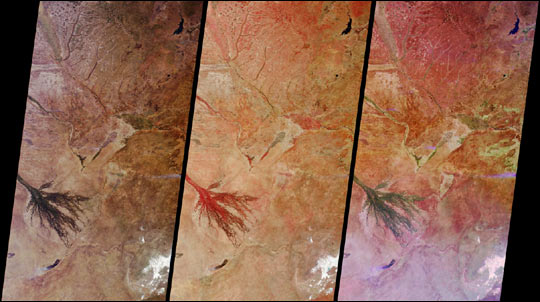 These Multi-angle Imaging Spectroradiometer (MISR) images of Zambia and Botswana, Africa were acquired on August 25, 2000. The left image is a "true" color view from the vertical-viewing (nadir) camera. True color means that the images acquired through MISR’s red, green, and blue filters, respectively, are displayed as red, green, and blue when creating the digital image. The middle image combines data from the green, red, and near-infrared bands. The right image contains red band data only, but is a composite of imagery from the nadir (An), 70.5-degrees forward (Df), and 70.5-degrees aftward (Da) cameras. The color variations in the multi-angle composite arise not from how the different parts of the scene reflect light at different wavelengths, but rather, at different angles.

The distinctive fan-like feature on the left of each image is the highly vegetated Okavango Delta, a mosaicked network of grasslands and water channels, observed here during the dry season. The town of Maun is at its southeastern edge. Note how the plant life, which is highly reflective in the near-infrared, shows up as bright red in the middle image. Vegetation also preferentially reflects light back toward the source of illumination, so in the right image, the Df camera image, which is displayed in green, is brighter in this region.

The body of water in the upper right is the Itezhi-Tezhi Dam, fed by the Kafue River in Zambia. At the lower left, south of the Okavango Delta, is Lake Ngami. A smoke plume is present at the southern edge of the lake. This plume and others show up in shades of blue and purple in the multi-angle composite as a result of the manner in which the smoke particles scatter sunlight.

Other landmarks include the Ntwetwe Pan, whose western edge is visible as the bright area in the lower right. The Zambezi River enters from the upper left and wends its way southeast, passing the Caprivi Strip, a narrow panhandle in northeast Namibia. The greater abundance of vegetation here testifies to the high rainfall that occurs during the wet season. Near the right-hand edge of the images is the location where the Zambezi plunges into Victoria Falls, considered to be among the most spectacular waterfalls in the world.