Wetlands of the Gulf Coast 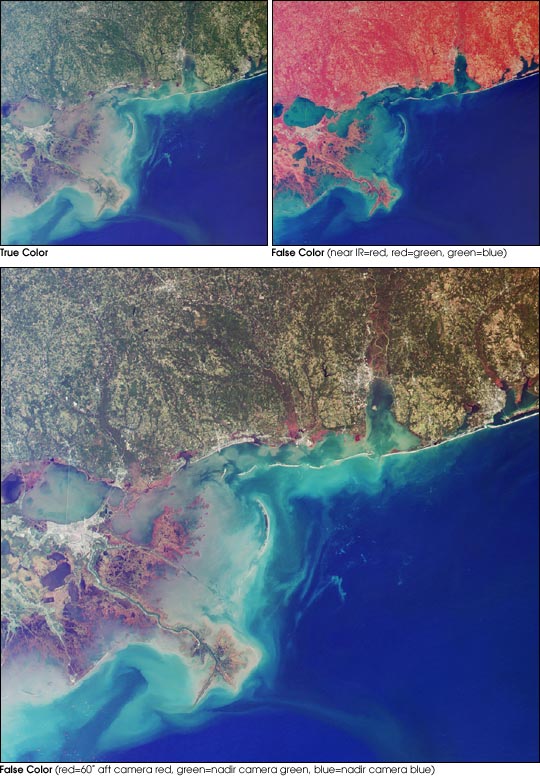 This set of images from the Multi-angle Imaging SpectroRadiometer highlights coastal areas of four states along the Gulf of Mexico: Louisiana, Mississippi, Alabama and part of the Florida panhandle. The images were acquired on October 15, 2001 and represent an area of 345 kilometers x 315 kilometers.

The two smaller images at the top are (left) a natural color view comprised of red, green, and blue band data from MISR’s nadir (vertical-viewing) camera, and (right) a false-color view comprised of near-infrared, red, and blue band data from the same camera. The predominantly red color of the false-color image is due to the presence of vegetation, which is bright at near-infrared wavelengths. Cities appear as grey patches, with New Orleans visible at the southern edge of Lake Pontchartrain, along the left-hand side of the images. The Lake Pontchartrain Bridge runs approximately north-south across the middle of the lake. The distinctive shape of the Mississippi River Delta can be seen to the southeast of New Orleans. Other coastal cities are visible east of the Mississippi, including Biloxi, Mobile and Pensacola.

The large image is similar to the true-color nadir view, except that red band data from the 60-degree backward-looking camera has been substituted into the red channel; the blue and green data from the nadir camera have been preserved. In this visualization, green hues appear somewhat subdued, and a number of areas with a reddish color are present, particularly near the mouths of the Mississippi, Pascagoula, Mobile-Tensaw, and Escambia Rivers. Here, the red color is highlighting differences in surface texture. This combination of angular and spectral information differentiates areas with aquatic vegetation associated with poorly drained bottomlands, marshes, and/or estuaries from the surrounding surface vegetation. These wetland regions are not as well differentiated in the conventional nadir views.

Variations in ocean color are apparent in all three views, and represent the outflow of suspended sediment from the seabed shelf to the open waters of the Gulf of Mexico. Major features include the Mississippi Delta, where large amounts of land-derived sediments have been deposited in shallow coastal waters. These deltaic environments form a complex, interconnected web of estuarine channels and extensive coastal wetlands that provide important habitat for fisheries. The city of New Orleans is prone to flooding, with about 45% of the metropolitan core situated at or below sea level. The city is protected by levees, but the wetlands which also function as a buffer from storm surges have been disappearing.

Spring Flooding on the Mississippi