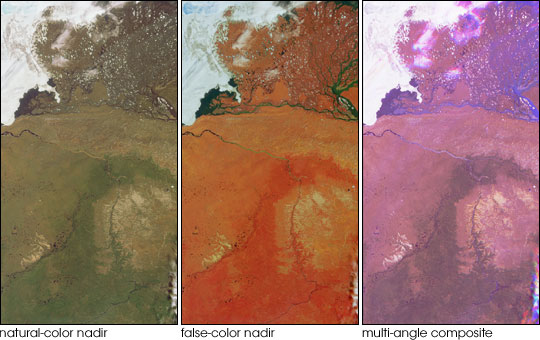 These views of the Russian Arctic were acquired by NASA’s Multi-angle Imaging SpectroRadiometer (MISR) instrument on July 11, 2004. The brief arctic summer had transformed the frozen tundra and the thousands of lakes, channels, and rivers of the Lena Delta into a fertile wetland, and the usual blanket of thick snow had melted from the vast plains and taiga forests. The images show an area in the northern part of the Sakha Republic in eastern Siberia. The Olenek River wends northeast from the bottom of the images to the upper left, and the delta through which the mighty Lena River empties into the Laptev Sea dominate the top portions of the images.

Creating accurate maps of vegetation structure is essential for understanding the seasonal exchanges of energy and water at the Earth’s surface and for preserving biodiversity. The left-hand image is a natural-color image from MISR’s nadir (vertical-viewing) camera, in which the rivers appear murky due to sediment, and photosynthetically active vegetation appears green. The center image is also from MISR’s nadir camera, but is a false-color view in which the predominant red color is due to the brightness of vegetation at near-infrared wavelengths. Apart from the Lena Delta, the most photosynthetically active regions are within the lower half of the image and throughout the great stretch of land that curves across the Olenek River.  The relatively barren ranges of the Volyoi Mountains appear as the pale tan-colored area to the right of image center.

The right-hand image is a multiangle, false-color view made from the red band data of the 60-degree-backward, nadir, and 60-degree-forward cameras, displayed as red, green and blue, respectively. Water appears blue in this image because sun glint makes smooth, wet surfaces look brighter at the forward camera’s view angle. Much of the landscape and many low clouds appear purple because these surfaces are both forward and backward scattering, and clouds that are further from the surface appear in a different spot for each view angle, creating a rainbow-like appearance. The highly vegetated region in the natural-color nadir image exhibits a faint greenish hue in the multi-angle composite. This subtle effect suggests that the nadir camera is observing more of the brighter, underlying surface than the oblique cameras, providing information about the distribution and density of trees and shrubs in this area.

The Multiangle Imaging SpectroRadiometer observes the daylit Earth continuously, and every 9 days views the entire globe between 82 degrees north and 82 degrees south latitude. The MISR Browse Image Viewer provides access to low-resolution true-color versions of these images. These data products were generated from a portion of the imagery acquired during Terra orbit 24273. The panels cover an area of about 230 kilometers x 420 kilometers, and utilize data from blocks 30 to 34 within World Reference System-2 path 134.