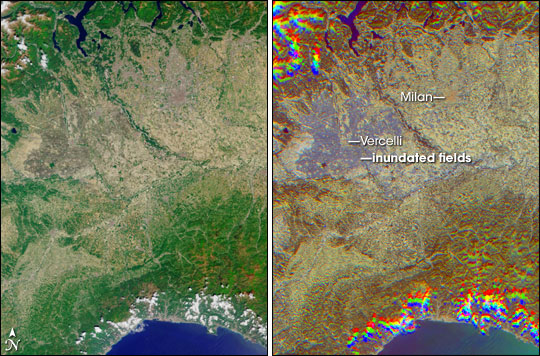 The lowlands of Lombardy and Piedmont in northwest Italy are some of the most highly developed irrigation areas in the world. Irrigated lands cover at least 160,000 acres in this part of Italy, where rice is the most important crop. These views of the region were acquired on May 8, 2005, by NASA’s Multi-angle Imaging SpectroRadiometer (MISR). The multiple viewing angles provided by MISR’s nine cameras make it possible to tell wet surfaces, including flooded lands, from other surfaces, and they also make cities easy to locate.

The left-hand image is a natural-color view acquired by MISR’s downward-looking (nadir) camera, and the right-hand image is a combination of red band data from MISR’s 60-degree-backward-, nadir, and 60-degree-forward-viewing cameras. (Red band is what scientists call the “channel” on the sensor that detects red light.) Color changes indicate surface texture, which is influenced by terrain, vegetation structure, soil type, and surface wetness. Wet surfaces or areas with standing water appear in blue or purple-blue hues. The purple-blue areas that dominate the center-left part of the image are part of the extensive irrigation network that exists throughout the plains and meadows of the region.

Cities with tall buildings appear in red-orange hues. In this type of image, the city of Milan is the most obvious. The small orange area in the center of the purple inundated area indicates the location of Vercelli, and the larger city of Milan is the orange area to the northeast, on the other side of the Ticino River. To a lesser extent, the cities of Novara, Pavia, Galliate, Mortara, and Vigevano are also identifiable by their orange hues.

MISR can tell various surface features like cities or irrigated areas apart because of the way surfaces reflect light. A smooth water surface tends to reflect sunlight away from the Sun. This effect is most apparent when a satellite views the surface with the Sun in front of the camera. Similarly, rough surfaces tend to reflect light back towards the Sun, and this “backward scattering” is most obvious when a satellites views a surface with the Sun behind the camera.

Clouds present over the high country to the west of the Lago Maggiore (upper left corner) and along the coast of the Golfo di Genova (bottom) appear in a different spot for each view angle, creating a rainbow-like appearance. Mountains also have a “wavy” look in the multi-angle combination because, like clouds, their height above the surface makes them appear in a different spot in each camera’s view angle.

The Multi-angle Imaging SpectroRadiometer observes the daylit Earth continuously, viewing the entire globe between 82 degrees North and 82 degrees South latitude every nine days. This image covers an area of about 131 kilometers by 191 kilometers. These data products were generated from a portion of the imagery acquired during Terra orbit 28660 and utilize data from block 54 within World Reference System-2 path 193.