Spring Flooding on the Mississippi 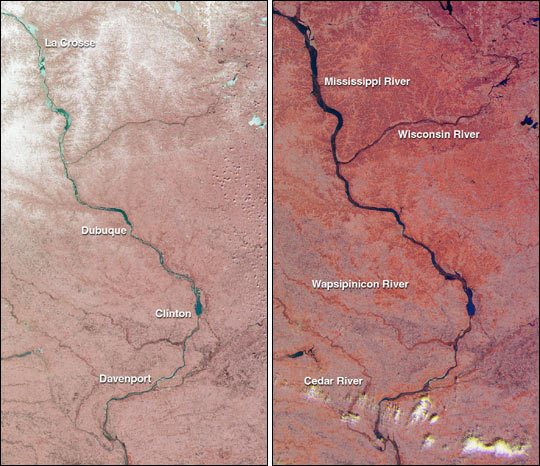 The mighty Mississippi River, from its source at Lake Itasca, Minnesota to the Gulf of Mexico, is approximately 3780 kilometers long and has flooded many times during its history. In April 2001, residents of Minnesota, Wisconsin, Iowa, and Illinois once again battled near-record water levels. These Multi-angle Imaging SpectroRadiometer (MISR) images, acquired one month apart, illustrate the effects of snowmelt and heavy rainfall on areas traversed by the upper Mississippi River.

Each image in this pair covers an identical 195-kilometer x 339-kilometer area. The one on the left was acquired March 26, 2001, and the one on the right is from April 27. Both are false-color composites, displaying data from the near-infrared band of the instrument's nadir (vertical-viewing) camera as red; the green band of the nadir camera as green; and the red band of the 26-degree forward camera as blue. Data from the forward-viewing camera is included to enhance the reflectivity of water. The near-infrared data provide a good indicator of the abundance of vegetation since plants are highly reflective in this spectral region. The redder color of the right-hand image is due to increased vegetation cover brought about by wet conditions and the onset of spring.

Locations of major cities are marked on the left-hand image; major rivers are marked on the right. The portion of the Mississippi River captured in these views extends from just north of La Crosse, Wisconsin to south of Davenport, Iowa. The Wisconsin River joins the Mississippi just below Prairie du Chien. On March 26, snow can clearly be seen over much of the northern portions of the left-hand image. At this point in time, the snow had already begun to melt and the Wapsipinicon River was 52 centimeters above flood stage at De Witt, Iowa (between Clinton and Davenport). By mid-April heavy rainfall swelled the Mississippi and Wisconsin rivers. In the early morning of April 25, two days before the right-hand image was acquired, the Mississippi River crested in Davenport, Iowa at 680 centimeters, slightly below the level reached in the record-setting flood of 1993.