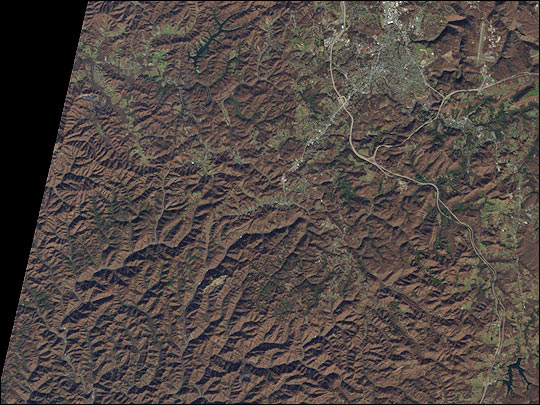 On Sunday, July 8, 2001, many small towns in West Virginia were hit by record-setting floods. A series of strong early morning storms dumped up to 8 inches (20 cm) of rain in southern portion of the state. The water quickly ran off the region's steep hillsides, turning small creeks into torrents and raising rivers well above flood stage. The rains also caused mudslides and many communities were completely cut off without water, power, or phone service. Some local residents are concerned that strip mines and logging operations may have exacerbated the flooding. As of July 12, area residents were still inspecting the damage and had just begun to clean up.

This Landsat 7 Enhanced Thematic Mapper Plus (ETM+) image (above) shows the region on December 1, 1999. The hardwood forests that cover the hills appear reddish-brown, while green vegetation fills some of the lower valleys. Dozens of creeks run through steep ravines, with small towns lining the limited flat land alongside the streams. At upper right is the town of Beckley and at lower left is Mullens, one of the most severely damaged towns.