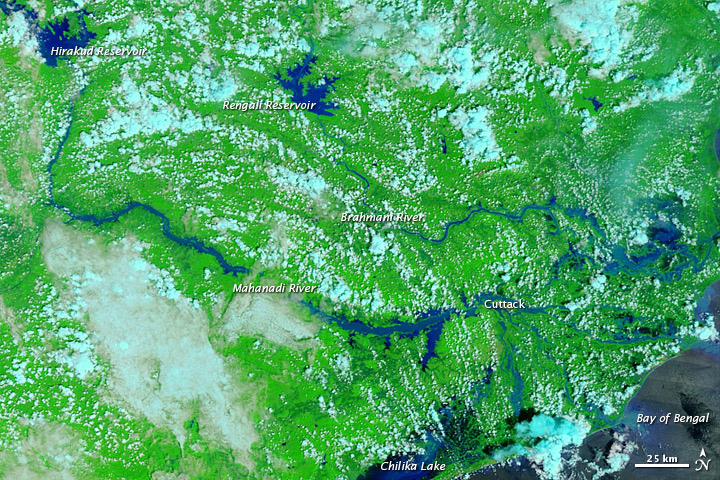 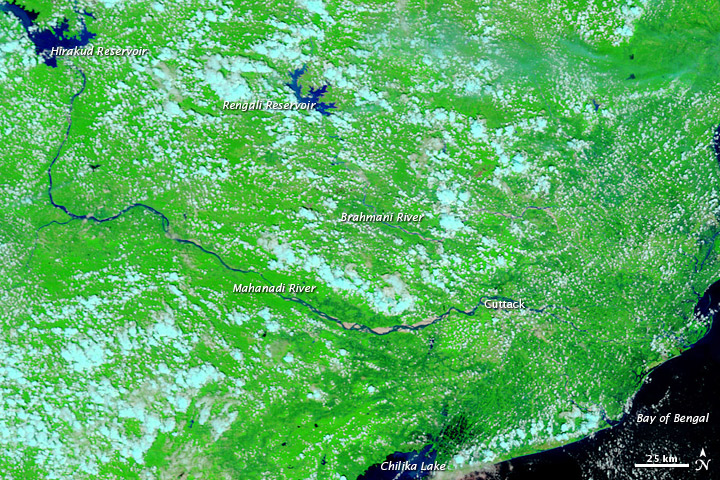 Heavy rains pushed rivers over their banks in the Indian state of Orissa in early September 2011. At least 16 people died, and several more were missing as of September 11, according to The Hindu. The Mahanadi and other rivers in the region stranded villagers after floodwaters breached embankments in three dozen locations.

The Moderate Resolution Imaging Spectroradiometer (MODIS) on NASA’s Terra satellite captured the top image on September 11, 2011. For comparison, the bottom image shows the same area a year earlier, on September 10, 2010. The images show the Mahanadi and Brahmani Rivers in Orissa.

Both images use a combination of infrared and visible light to increase contrast between water and land. Water varies in color from electric blue to navy. Vegetation is bright green and clouds are pale blue-green.

Compared to 2010, rivers and lakes are visibly swollen in 2011. The biggest changes occur along the Mahanadi and easternmost Brahmani Rivers, which have spilled onto floodplains at multiple locations. Water levels are also higher in Hirakud and Rengali Reservoirs, and in Chilika (Chilka) Lake. High water fringes the city of Cuttack.

By September 11, 2011, authorities had evacuated roughly 60,000 residents from low-lying areas, and had begun airdrops of food to marooned citizens, The Hindu reported. Flooding had affected about 2,550 villages and 13 towns. The BBC reported that flooding affected large parts of southern Asia, including India and neighboring Pakistan.

Heavy rains pushed rivers over their banks in the Indian state of Orissa in September 2011.