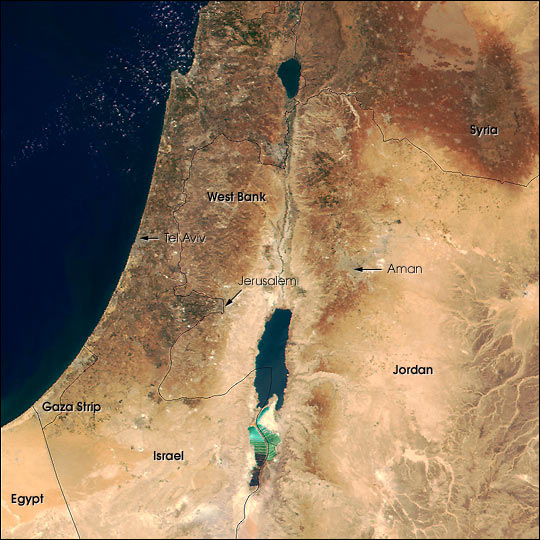 To paraphrase English author T.H. White, borders are the one thing a man sees that a bird cannot see as it flies high overhead. For the 15th consecutive day, differences in ideology have sparked violence and tension in the middle-east as the rest of the world watches, concerned.

This true-color image of the region was taken on September 10, 2000, by the MODerate-resolution Imaging Spectroradiometer (MODIS) flying aboard NASA's Terra spacecraft. The image shows the lands of Israel along the eastern shore of the Mediterranean Sea, with the countries of Jordan to the southeast and Syria to the Northeast. Jerusalem, labeled, is Israel's capital city and Aman, labeled, is the capital of Jordan. The region known as the West Bank lies between the two countries. Running from north to south, the Jordan River links the Sea of Galilee to the Dead Sea.

The bright lights of the cities are intersected and offset by the dark valley of the Jordan River and Dead Sea.