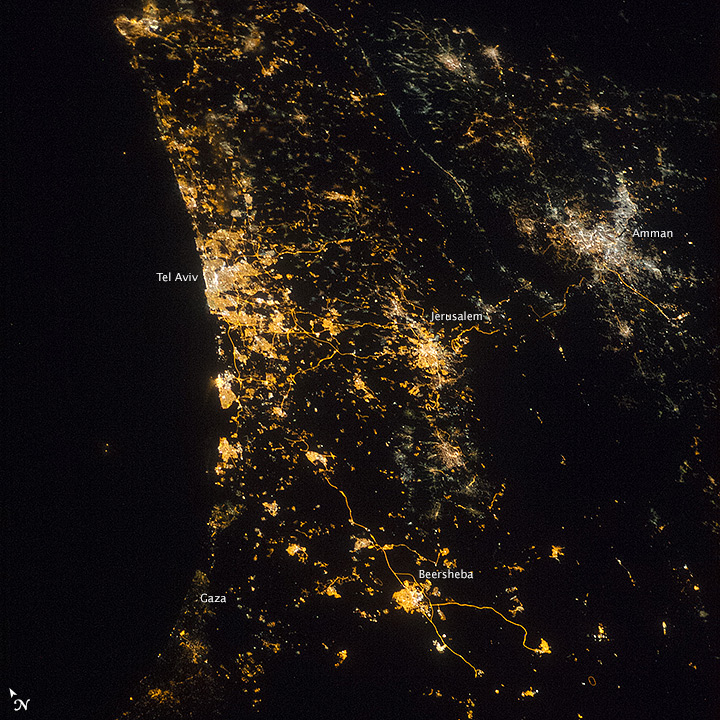 This night photograph taken by astronauts aboard the International Space Station (ISS) shows the location and size of cities at the east end of the Mediterranean Sea. The largest, brightest cluster is the Israeli city of Tel Aviv, a port set against the blackness of the Mediterranean Sea. Jerusalem, Israel’s capital city, and Amman, Jordan’s capital, are the next largest (with Amman’s lights having a whiter tone), followed by Beersheba.

Bright but narrow lines that snake between the cities are highways. The darker areas with smaller patches of lights are mostly agricultural and pastoral areas of Israel, Sinai, the West Bank, and Jordan. A wide, almost black zone between Jerusalem and Amman trends north-south across the right half of the image; it is the long valley that includes the Jordan River and the Dead Sea.

Click here to view an astronaut image of the same area in daylight. And read more here about a new NASA crowd-sourcing project to identify cities and towns in night images from the space station.

Astronaut photograph ISS040-E-74022 was acquired on July 22, 2014, with a Nikon D3S digital camera using an 85 millimeter lens, and is provided by the ISS Crew Earth Observations Facility and the Earth Science and Remote Sensing Unit, Johnson Space Center. The image was taken by the Expedition 40 crew. It has been cropped and enhanced to improve contrast, and lens artifacts have been removed. The International Space Station Program supports the laboratory as part of the ISS National Lab to help astronauts take pictures of Earth that will be of the greatest value to scientists and the public, and to make those images freely available on the Internet. Additional images taken by astronauts and cosmonauts can be viewed at the NASA/JSC Gateway to Astronaut Photography of Earth. Caption by M. Justin Wilkinson, Jacobs at NASA-JSC.

The bright lights of the cities are intersected and offset by the dark valley of the Jordan River and Dead Sea. 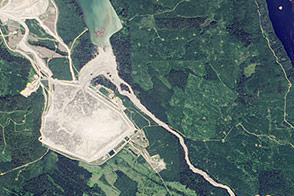