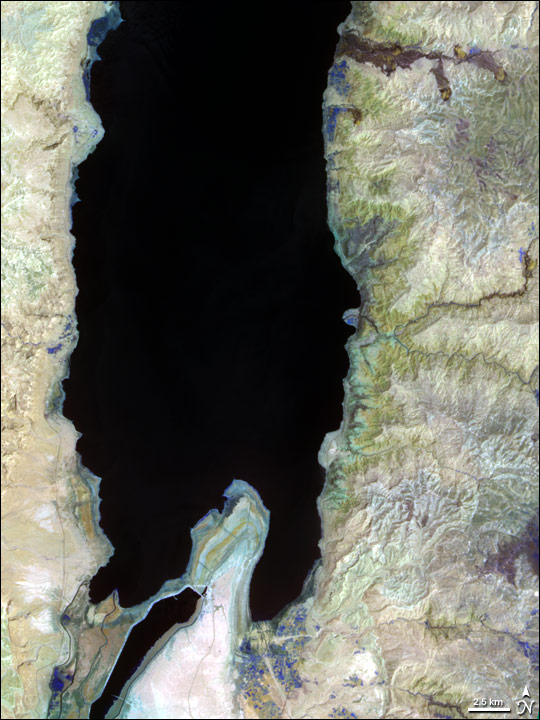 The lowest spot on dry land, the Dead Sea depression sinks 400 meters (1,300 feet) below sea level. River beds known in the region as wadis drain into the small sea occasionally when it rains, but it is principally fed by the Jordan River, which flows in from the north. The extremely dry climate, diversion of tributaries for various human uses, and massive salt evaporation projects in the southern part of the sea have led to dramatic drops in the sea’s level. Today, the Lisan Peninsula (bottom center) forms a land bridge through the Dead Sea; the southern part of the basin is cut off from the north, and it is used exclusively for evaporating salt and minerals from the water.

The Dead Sea occurs in a rift zone, where the Arabian tectonic plate (east side) is pulling northward, away from the Africa tectonic plate (west side). Highlands and plateaus on either side of the rift end in escarpments at the seashore. The greenish cast of the landscape on the eastern side of the sea suggests rainfall is more plentiful there than on the West Bank, which is an arid tan.

In Jordan (east of the Dead Sea), the rift valley from the Sea of Galilee in the north to the Gulf of Aqaba in the south is called the Ghor Zone. The Ghor Zone is one of the country’s most significant agricultural regions because of the availability of irrigation water, reports the United Nations Food and Agriculture Organization. Vegetables, citrus fruits and bananas are the most common crops. The irrigated agricultural areas show up as dark blue squares along the eastern and southeastern shores of the Dead Sea in this image.

This image of the Dead Sea was taken by the Advanced Spaceborne Thermal Emission and Reflection Radiometer (ASTER) on NASA’s Terra satellite on May 22, 2006.