Carbon Monoxide over Borneo and Sumatra 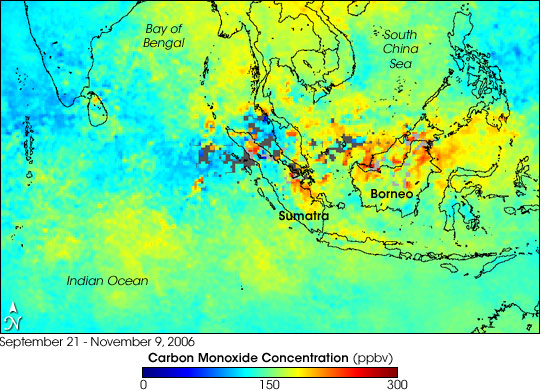 From mid-September through early November 2006, fires on the Indonesian islands Sumatra and Borneo churned out thick smoke that blanketed the islands and spread over the region. Photo-like images of the event showed gray haze mingling with clouds almost every day for weeks at a time. Smoke contains visible air pollutants, like soot, as well as invisible pollutants, like carbon monoxide. Carbon monoxide and other fire pollutants can increase ground-level, “bad,” ozone.

This image shows average carbon monoxide concentrations at an altitude of about 3,000 meters between September 21 and November 9, 2006. The image is based on an average of approximately twice-daily observations collected by the Measurements of Pollution in the Troposphere (MOPITT) sensor on NASA’s Terra satellite. Places where the average carbon monoxide levels reached 300 parts per billion by volume (ppbv) are colored red, while the areas of lowest concentration are blue. Places where persistent clouds prevented the sensor from making measurements are colored gray. Pockets of high values hang over Sumatra and Borneo, but also occur over the mainland portions of Malaysia (north of Sumatra) as well as over parts of the South China Sea. Concentrations higher than 150 ppbv stretch over the Indian Ocean to the south and over Southeast Asia (top center).

The primary reason fires in this area generate so much smoke is that the lowland forests of the region are frequently swampy, which decreases the rate at which dead vegetation decomposes. Thick layers of un-decayed vegetation—peat—build up on the forest floor, and when the peat dries out enough, it becomes extremely flammable. When it burns, it produces copious smoke. Several factors can cause the peat to dry out, including naturally occurring droughts, such as those linked to El Niño events, and human activities, such as logging that opens the canopy to more sunlight. Despite ongoing efforts by the Indonesian government to control the agricultural burning that often leads to forest and peat swamp fire outbreaks, many fires are still started illegally. Fires can burn off and on from August until the rainy phase of the monsoon gets fully underway late in the year.

NASA image by Jesse Allen, based on data from Gabriele Pfister, University Corporation for Atmospheric Research.

Agricultural and forest fires burning on Sumatra and Borneo since late September 2006 blanketed a wide region with smoke that interrupted air and highway travel and pushed air quality to unhealthy levels. Fires were still burning in early November.

This map shows concentrations of carbon monoxide—one component of smoke—from June 23–28 across Canada and the northern United States.