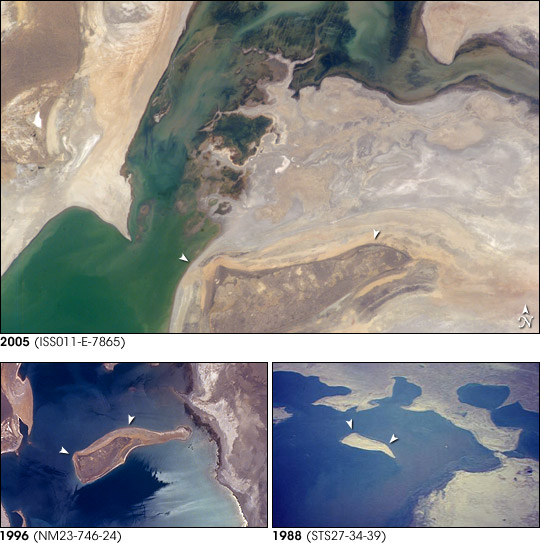 The arrow-shaped island in the Aral Sea (lower-right view, taken in 1988) used to be a 35-kilometer-long visual marker, indicating the Aral Sea to astronauts. An image from the present International Space Station increment (top) shows how much the coastline has changed as the sea level has dropped during the last three decades. Arrows indicate the northern shoreline of the original island. This 2005 image shows that the island is now part of the mainland. Deep blues and greens indicate the water-covered areas. The exposed sea floor is characterized by old shorelines (parallel lines surrounding the island) and outlines of ancient deltas. An intermediate stage in the falling sea level is documented in a view taken in 1996 (lower left), in which the island appears larger and elongated towards the eastern shore of the sea.

Since the 1960s, sea levels have dropped drastically as rivers that maintained the level of the Aral Sea were diverted—completely in later years—for agricultural purposes, especially for growing cotton. A thriving fishing industry in the world’s then fourth-largest lake was largely eliminated as the area of the sea shrank by more than 60 percent. Salts and pesticides that accumulated from agricultural runoff were subsequently exposed on the dry parts of the sea floor. Winds now transport these pollutants into surrounding fields and towns. Although the Kazakhstan government made a concerted effort to increase river inflow into the sea starting in 2003, it will take years before sea levels begin to rise. 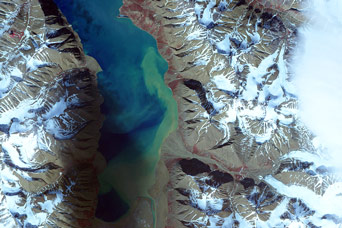