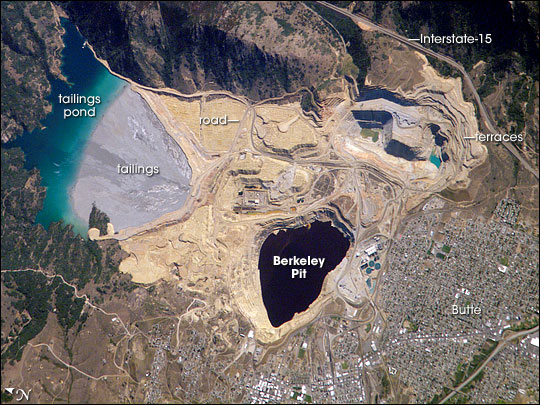 Mined for gold, silver, and copper, the region of Butte, Montana, had already earned the nickname of “The Richest Hill on Earth” by the end of the 19th century. Demand for electricity increased demand for copper so much that by World War I, the city of Butte was a boomtown. Well before World War I, however, copper mining had spurred the creation of an intricate complex of underground drains and pumps to lower the groundwater level and continue the extraction of copper. Water extracted from the mines was so rich in dissolved copper sulfate that it was also “mined” (by chemical precipitation) for the copper it contained. In 1955, copper mining in the area expanded with the opening of the Berkeley Pit. The mine took advantage of the existing subterranean drainage and pump network to lower groundwater until 1982, when a new owner suspended operations. After the pumps were turned off, water from the surrounding rock basin began seeping into the pit. By the time an astronaut on the International Space Station took this picture on August 2, 2006, water in the pit was more than 275 meters (900 feet) deep.

This image shows many features of the mine workings, such as the terraced levels and access roadways of the open mine pits (gray and tan sculptured surfaces). A large gray tailings pile of waste rock and an adjacent tailings pond appear to the north of the Berkeley Pit. Color changes in the tailings pond result primarily from changing water depth. Because its water contains high concentrations of metals such as copper and zinc, the Berkeley Pit is listed as a federal Superfund site. The Berkeley Pit receives groundwater flowing through the surrounding bedrock and acts as a “terminal pit” or sink for these heavy-metal-laden waters, which can be as strong as battery acid. Ongoing clean-up efforts include treating and diverting water at locations upstream of the pit to reduce inflow and decrease the risk of accidental release of contaminated water from the pit into local aquifers or surface streams.

Astronaut photograph ISS013-E-63766 was acquired August 2, 2006, with a Kodak 760C digital camera using an 800 mm lens, and is provided by the ISS Crew Earth Observations experiment and the Image Science & Analysis Group, Johnson Space Center. The International Space Station Program supports the laboratory to help astronauts take pictures of Earth that will be of the greatest value to scientists and the public, and to make those images freely available on the Internet. Additional images taken by astronauts and cosmonauts can be viewed at the NASA/JSC Gateway to Astronaut Photography of Earth.