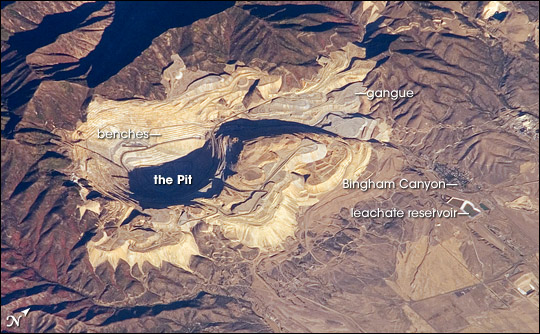 The Bingham Canyon Mine (image center) is one of the largest open-pit mines in the world, measuring over 4 kilometers wide and 1,200 meters deep. Located about 30 kilometers southwest of Salt Lake City, Utah, the mine exploits a porphyry copper deposit, a geological structure formed by crystal-rich magma moving upwards through pre-existing rock layers. As the magma cools and crystallizes, it forms an igneous rock with large crystals embedded in a fine-grained matrix, known as a porphyry. Hot fluids circulate through the magma and surrounding rocks via fractures, depositing copper-bearing and other minerals in spatial patterns that a geologist recognizes as a potential porphyry copper deposit.

Mining first began in Bingham Canyon in the late nineteenth century, when shafts were sunk to remove gold, silver, and lead deposits that played out by the early 1900s. It would take the advent of open-pit mining in 1899 to turn the Bingham copper deposit into an economically favorable resource. In open-pit mining, the copper-containing rocks are excavated from the surface downward in terraces. By the 1930s, open-pit mining had turned “the Hill” at Bingham Canyon into “the Pit.”

This astronaut photograph of the Bingham Canyon Mine shows parallel benches (stepped terraces) along the western pit face. These benches range from 16 to 25 meters high, and they provide access for equipment to work the rock face and maintaining the stability of the sloping pit walls. A dark, larger roadway is also visible directly below the benches. Brown to gray, flat-topped hills of gangue (waste rock) surround the pit, and are thrown into sharp relief by shadows and the oblique (from the side) viewing angle of the photograph. Reservoirs for leach water (associated with ore processing) are visible to the south of the city of Bingham Canyon.

Today’s copper market is booming thanks to global demands from construction, telecommunications, and electronics sectors of the economy. The Kennecott Utah Copper Company removes about half a million tons of material from the Bingham Canyon Mine every day for processing. In 1906, the rate of removal was 100,000 tons of material per month. Over 17 million tons of copper have been removed to date. Geological and engineering models suggest that the mine can be deepened by an additional 200 meters before extraction costs become greater than the value of the remaining copper.

The geological and chemical processes that produce copper deposits also produce minerals such as iron sulfides, which react with water or oxygen on the surface to produce colorful minerals. Geologists can sometimes use satellite observations to identify places where the topography and the rock types on the surface suggest copper ores might be present below ground. Read the feature story Prospecting from Orbit for more information.

The featured astronaut photograph ISS015-E-29867 was acquired September 20, 2007, by the Expedition 15 crewwith a Kodak 760C digital camera using an 800 mm lens. The image is provided by the ISS Crew Earth Observations experiment and the Image Science & Analysis Laboratory, Johnson Space Center. The image in this article has been cropped and enhanced to improve contrast. The International Space Station Program supports the laboratory to help astronauts take pictures of Earth that will be of the greatest value to scientists and the public, and to make those images freely available on the Internet. Additional images taken by astronauts and cosmonauts can be viewed at the NASA/JSC Gateway to Astronaut Photography of Earth.