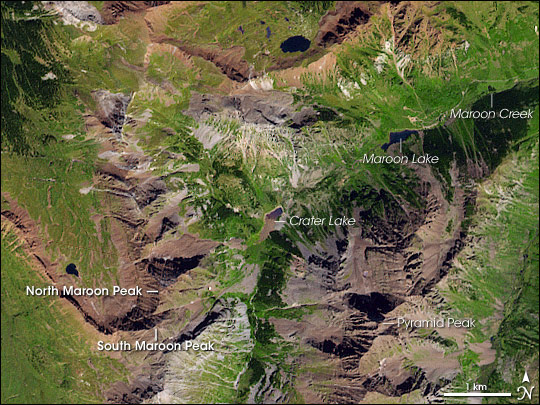 Among the most photographed peaks in the United States, the Maroon Bells near Aspen, Colorado, provide scenic, recreational, and scientific interest for modern visitors. These mountain peaks preserve evidence of an ancient mountain range that eroded millions of years before today’s Rocky Mountains rose.

On September 12, 2000, the Advanced Spaceborne Thermal Emission and Reflection Radiometer (ASTER) on NASA’s Terra satellite captured this image of the Maroon Bells and the surrounding area. As the name suggests, the Maroon Bells have a characteristic red color not uncommon in the rocks of this region. The brick-red rocks on bare mountain peaks are interspersed with green valleys. Angled sunlight casts shadows along mountain ridges, some of which rise to 4,260 meters (14,000 feet), while lush vegetation lines Maroon Creek in the valley below. The most-photographed peaks are North Maroon Peak and South Maroon Peak, separated by about half a kilometer (one-third of a mile).

The reddish hues of these peaks give clues to their origin. They are composed of sediments that eroded off ancient mountains composed of granite. Roughly 300 million years ago, two north-south mountain ranges arose in what is now Colorado: the Ancestral Front Range in the east and the Uncompahgre Mountains in the west. These ancient mountains eroded sediments into neighboring basins, and in the millions of years that followed, oxidation of the minerals in these sediments deepened their ruddy color. The sediments lay low until pushed skyward again by the next mountain-building event, beginning about 70 million years ago, which created the current Rocky Mountains, including the picturesque peaks of the Maroon Bells.

You can download a 15-meter-resolution KMZ file of Maroon Bells Wilderness suitable for use with Google Earth.