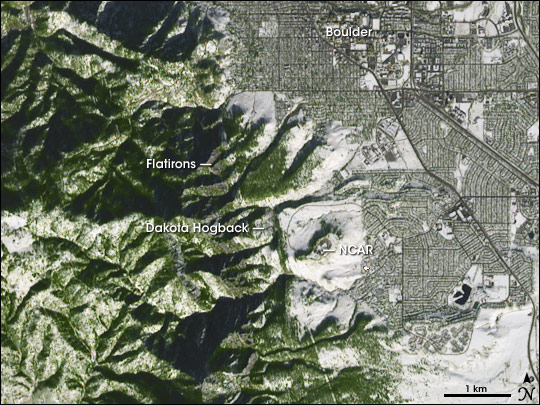 On a hillside west of Boulder, Colorado, the National Center for Atmospheric Research (NCAR) straddles the boundary between two different types of landscape. To the east is the relatively flat terrain of the Boulder Valley. The mountains to the west are the stony archives of hundreds of millions of years of changing landscapes.

The Advanced Spaceborne Thermal Emission and Reflection Radiometer (ASTER) on NASA’s Terra satellite captured this simulated true-color image of NCAR and its surroundings on December 12, 2003, after a snowstorm blanketed much of the area. Snow covers the ground near the research center, as well as lawns in the nearby city, and parts of the mountain slopes where evergreen trees poke skyward through the snow.

Among the most prominent features west of Boulder are the Flatirons—giant slabs of red sandstone leaning toward the west. Although “flatiron” can be applied to some rock formations well north and south of Boulder, the rocks most visible from the city are northwest of NCAR. Snow seldom lingers long on these giant rocks; the Sun quickly melts it away in all but the coldest temperatures. So while much of the rest of the area is snowy in this picture, the Flatirons are largely bare. East of the Flatirons is the Dakota Hogback, nicknamed for its resemblance to a razorback hog.

The Flatirons and the Dakota Hogback are just two examples of remains of ancient landscapes. By examining evidence in Boulder and elsewhere, geologists have been able to piece together a complex puzzle of changing land surfaces, elevations, and climates in the area over millions of years.

Colorado was not always above sea level, and some 600 million years ago, sea water flooded the area. Seas alternately invaded and retreated over the next few hundred million years, but if any rocks from that era were deposited, they later eroded away. About 300 million years ago, mountain ranges known as the Ancestral Rockies rose in central and western Colorado. As wind and water gradually eroded these mountains, the resulting sandstone sediments flowed off to the east and west. Near Boulder, these sediments lay buried underground, eventually turning into the maroon sandstones known today as the Fountain Formation. Besides the Boulder Flatirons, the Fountain Formation appears in Red Rocks Amphitheatre, Roxborough Park, and Garden of the Gods.

After the sediments that would become the Fountain Formation were deposited, seas returned to Colorado, starting a 150-million-year cycle of floodplain and desert landscapes. Throughout the cycle, rock sediments of alternating hardness and durability were laid down. During the Jurassic, the area was a warm, wet swamp where sauropods munched the local vegetation. During the Cretaceous, shallow seas once again invaded, and the area became a coastline where dinosaurs roamed along the shore. Over time, sandy beaches can turn into erosion-resistant rock, like the sandstone of the Dakota Hogback. Just east of the hogback are the remains of an ancient sea floor, known as the Pierre Shale. NCAR itself sits atop this rock formation.

All this evidence of ancient landscapes might still be underground were it not for a mountain-building episode beginning about 70 million years ago. At that time, the current Rocky Mountains began to rise. As the mountains rose, old sandstones comprising the Fountain Formation and Dakota Sandstone pushed out of the ground, making them hallmarks of today’s Colorado Front Range.

You can download a 15-meter-resolution KMZ file of the Flatirons suitable for use with Google Earth.