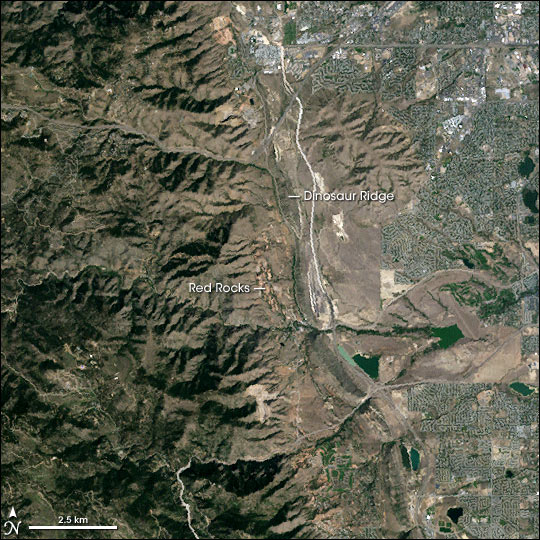 Skiers, hikers, and tourists prize Colorado’s Rocky Mountains for what they offer today: steep ski slopes, challenging climbs, and spectacular views. Geologists and paleontologists prize the region for the information it offers about the past. A few attractions that give a glimpse into the Colorado’s ancient history lie next to Denver’s western suburbs: Dinosaur Ridge and Red Rocks Park.

Landsat 7’s Enhanced Thematic Mapper Plus (ETM+) sensor captured this image on September 14, 2000. The Rocky Mountain Foothills cut a line down the middle of this image. The eastern edge of this line is known locally as “the hogback” because it resembles the razorback of a wild boar. To the east of the hogback is the Denver metro area, discernible through the meandering lines of residential neighborhood streets. To the west are the foothills and isolated outcrops of ancient red rocks.

Colorado’s rocks record hundreds of millions of years of climatic and geological change. When the Rocky Mountains rose, starting roughly 70 million years ago, the uplift unearthed rock layers that had hidden underground for thousands of centuries. One group of rocks included ancient red sandstones. These rocks date from 300 million to 250 million years ago, and they comprise the only evidence we have of a mountain chain far more ancient than the current Rocky Mountains. Known to geologists as the Ancestral Rocky Mountains, these mountains likely ran parallel to the current mountain range, lying a little farther to the west. At the time they loomed over what is now Colorado, fin-backed proto-mammals wandered the landscape. Over eons of time, those mountains eroded, and their sediments hardened and reddened, due to iron-rich water percolating through them. These rocks were buried deep underground for tens of millions of years, then were pushed to the surface when the current Rocky Mountains rose. Today, the red rocks occur sporadically throughout the Rocky Mountain Foothills. In Roxborough Park and Red Rocks Park, the ancient rocks have formed a natural amphitheatre, now a popular site for concerts.

Like the ancient red rocks to the west, the hogback also records activity over tens of millions of years. The oldest rocks were deposited during the Jurassic Period (206 to 144 million years ago), when the area was a sea-level swamp where sauropod dinosaurs (a group of long-necked, four-legged herbivores) roamed. The newest rocks were deposited during the Cretaceous Period (144 to 65 million years ago), when a huge interior seaway alternately invaded and retreated from North America. During this time, Iguanodon dinosaurs (plant-eaters with beak-like jaws and hind legs that were much larger than their front legs) walked along the beachfront property. The Cretaceous sediments covered the earlier Jurassic sediments, and all those rocks lay flat for millions of years. Like the ancient red rocks to the west, these sediments were pushed to the surface by the same mountain-building process that raised the Rocky Mountains. The uplift also tipped these rocks over, showing older Jurassic rocks on the west, and younger Cretaceous rocks on the east. At Dinosaur Ridge near Morrison, Colorado, visitors can see Jurassic sauropod bones on the west side, then walk around the ridge to see Cretaceous iguanodon and theropod tracks on the east side. (Theropods are a group of carnivorous, bipedal dinosaurs that includes Tyrannosaurus rex and the ancestors of modern birds.) The trackway on the east side of Dinosaur Ridge is one of the best dinosaur trackways near a major metropolitan area anywhere in the United States. 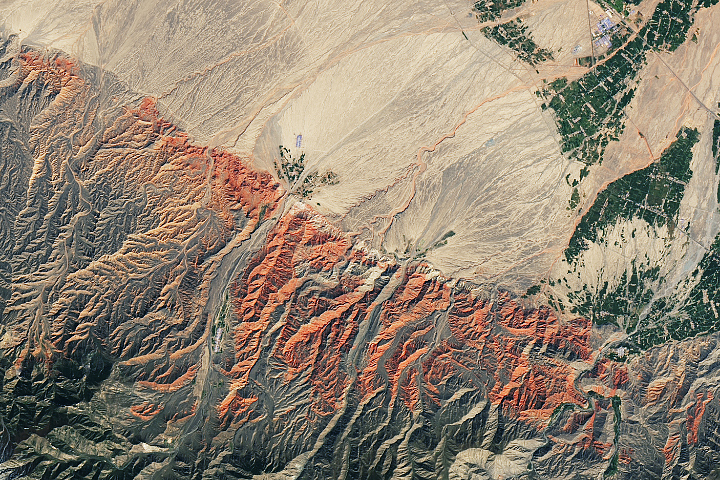