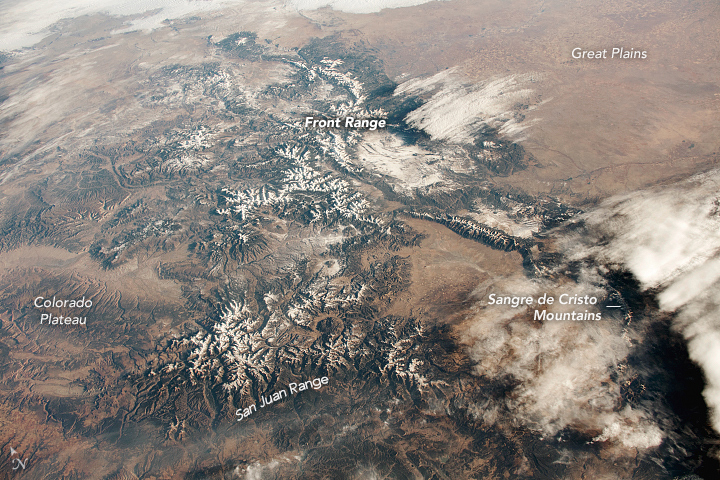 The Colorado segment of the Rocky Mountains is on full display in this photograph taken by an astronaut onboard the International Space Station (ISS). Cloud cover stalled on the eastern slope of the mountains, allowing for this image of the entire Front Range, as well as several other ranges—San Juan and Sangre de Cristo—that together comprise the Rocky Mountains in Colorado. The Colorado Plateau is readily recognizable due to its flat profile relative to the adjacent mountain ranges.

The snow-capped peaks along the Front Range mark the boundary between the Rockies and the Great Plains to the east. The Front Range is also a section of the Great Divide. Often referred to as The Continental Divide, it is a hydrologic boundary that delineates the direction of water flow between east and west, toward the Atlantic or Pacific oceans.

Nearly fifty years ago, Apollo astronauts visited the San Juan range for geology training. The rocks and terrain of the San Juan Mountains made the area well suited for teaching astronauts to recognize different types of rocks for sampling, and to record their observations for further analysis by scientists back on Earth.

Astronaut photograph ISS061-E-32065 was acquired on November 6, 2019, with a Nikon D5 digital camera using a 50 millimeter lens and is provided by the ISS Crew Earth Observations Facility and the Earth Science and Remote Sensing Unit, Johnson Space Center. The image was taken by a member of the Expedition 61 crew. The image has been cropped and enhanced to improve contrast, and lens artifacts have been removed. The International Space Station Program supports the laboratory as part of the ISS National Lab to help astronauts take pictures of Earth that will be of the greatest value to scientists and the public, and to make those images freely available on the Internet. Additional images taken by astronauts and cosmonauts can be viewed at the NASA/JSC Gateway to Astronaut Photography of Earth. Caption by Alex Stoken, Jacobs Technology, JETS Contract at NASA-JSC. 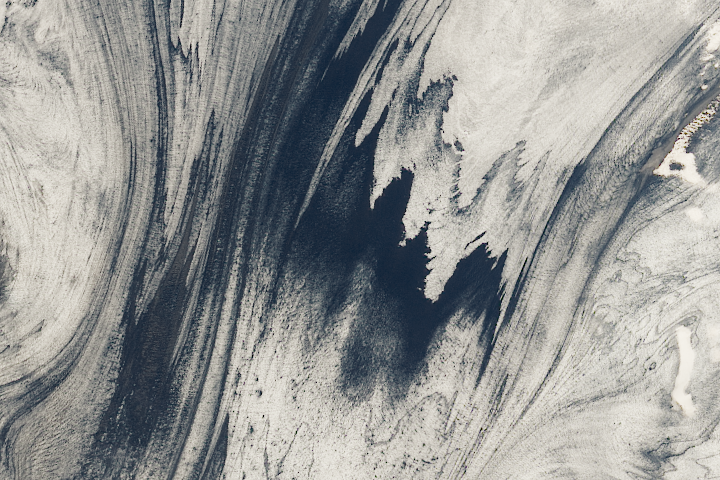