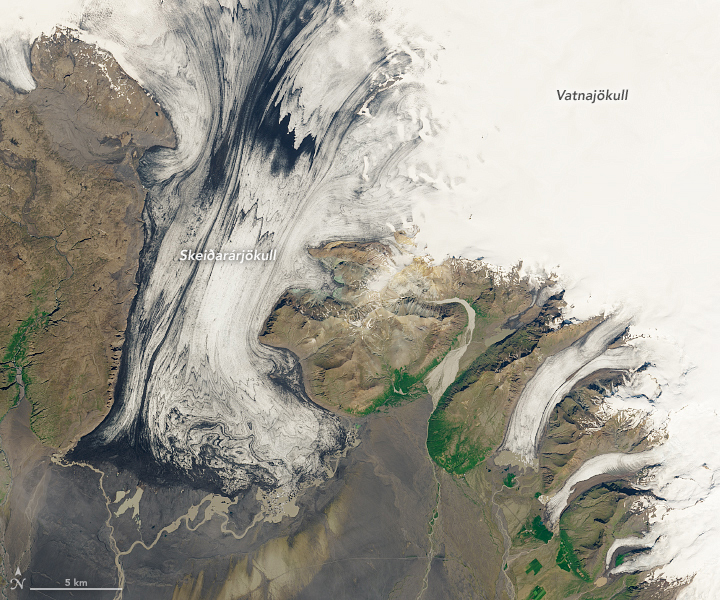 Today’s Image of the Day is the answer to the January puzzler.

Iceland’s Vatnajökull National Park is one of the rare places in the world where fire and ice lie adjacent to one another. The park is home to eight volcanoes located under glaciers. When one of these subglacial volcanoes erupts, sudden glacial outburst floods—called jökulhlaups in Icelandic—can occur with damaging consequences.

One glacier well-known for jökulhlaups is Skeiðarárjökull, located near one of Iceland’s most active volcanoes, Grímsvötn. Geothermal heat creates a subglacial lake within the volcano’s crater, which leads to massive amounts of meltwater during volcanic eruptions. The subglacial volcano is located approximately 50 kilometers (30 miles) from the end of the glacier (where the meltwater emerges). During these jökulhlaups, the glacier’s meltwater carries sediments away from the glacier and deposit it onto a broad plain. These broad outwash plains, called sandurs, are most commonly found in Iceland.

These first two images on this page show the Skeiðarárjökull glacier on July 2, 2019, as observed by the Operational Land Imager on Landsat 8. The black streaks in the close-up image below are volcanic ash layers that became embedded in the glacier after previous eruptions. 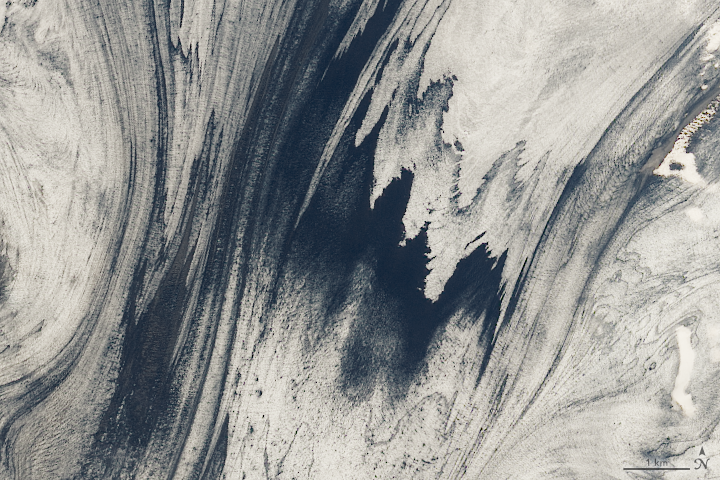 Glacial lake outburst floods at Skeiðarárjökull can cause a lot of damage to roads and bridges on the floodplain. During one notable event in November 1996, Grímsvötn erupted and sent floodwaters across Skeiðarársandur, a large sandur connected to the glacier. This jökulhlaup, which lasted two days, washed away bridges and created many “icequakes”—internal cracking of the glacier. In the aftermath, icebergs as tall as 15 meters (50 feet) and weighing 1,000 tons were spread across the plain. 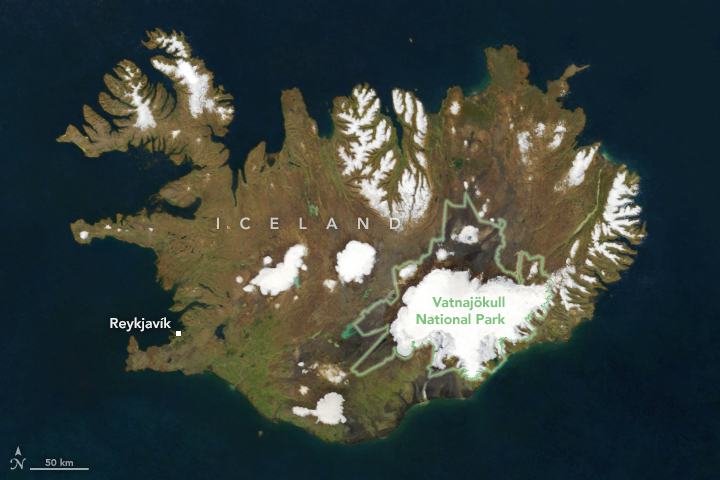 Skeiðarárjökull is located in the southern region of Vatnajökull National Park, which covers about 14 percent of the country. The map above shows the extent of the park and the Vatnajökull ice cap, which covers 8 percent of the country and is Europe’s largest ice cap by area. The map was created from a composite of satellite images acquired between June 1, 2019, and September 20, 2019, by the Moderate Resolution Imaging Spectroradiometer instruments on NASA’s Aqua and Terra satellites.

The park’s volcanic zones hold many groundwater fauna that has survived the ice age. Many scientists come to Vatnajökull to study the single-celled organisms that live in the park’s subglacial lakes because these inhospitable environments may be similar to those on Jupiter and Saturn. Because of its unique convergence of glaciers and volcanoes, Vatnajökull is listed as a UNESCO World Heritage Site.

Skeiðarárjökull is known for flooding caused by volcanic eruptions underneath the ice.