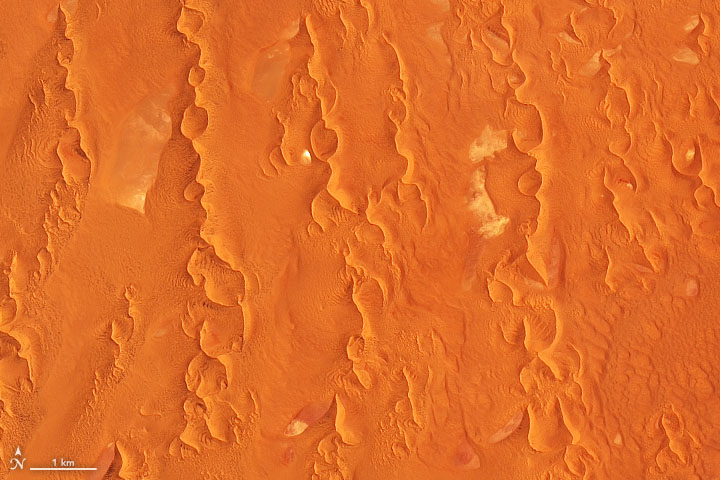 Sand seas span more than 30,000 square kilometers of Africa’s Namib Desert. But they are hardly uniform in color or texture. Thanks to winds and rare water, there are always new patterns and sandscapes to be found with the attentive eye.

These images, acquired on November 13, 2019, by the Operational Land Imager (OLI) on Landsat 8, show dunes and landforms of the north-central and eastern parts of the sand sea.

According to Andrew Goudie, a geographer emeritus at University of Oxford, the dunes are “complex linear dunes” (first image), commonly seen across the central part of the Namib Sand Sea. The dunes’ “linear” ridges loom about 100 meters (300 feet) over the desert floor and generally run south to north. They are made “complex” by the myriad other types of dunes that curve and branch from them.

Goudie, who specializes in desert geomorphology and has written about the region, notes that the dunes are composed of quartz sand that blew inland from the desert’s coastal areas. (And those coastal sands originated from sediments pouring out of the Orange River in the lower Namib Desert.) The red color is a coating of iron oxide, which becomes more prominent (redder) as the desert stretches farther inland from the coast.

The sea of red is interrupted in areas by small areas of white. These outcrops—likely composed of cemented gravels, sand, and silts—provide a glimpse at the surface on which the sand sea developed. 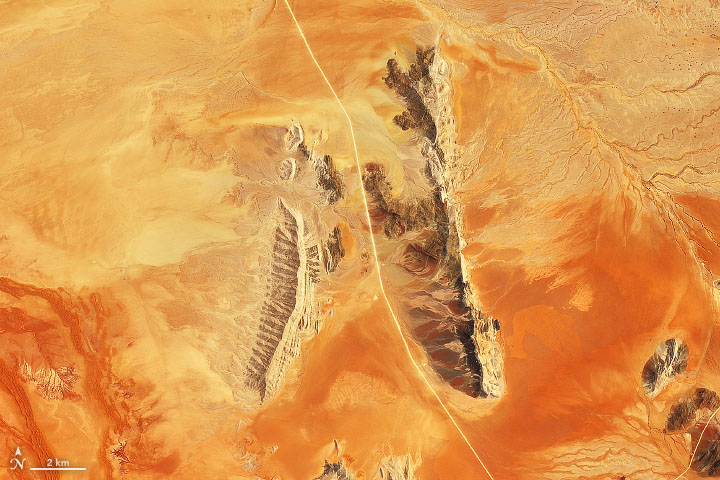 Those small inter-dune outcrops pale in comparison to those on the easternmost edge of the Namib Sand Sea (second image). These outcrops of eroded bedrock, near the edge of the Great Escarpment, tower about 300 meters (1,000 feet) above the surrounding plains.

Notice the small areas of dark red between the two main outcrops. Goudie thinks this is likely Tsondab sandstone—weathered sand about 20 million years old that predates the modern sand sea. Gray areas fanning out around the outcrops are where material has been washed down from the slopes by the rare but occasional rainstorm. 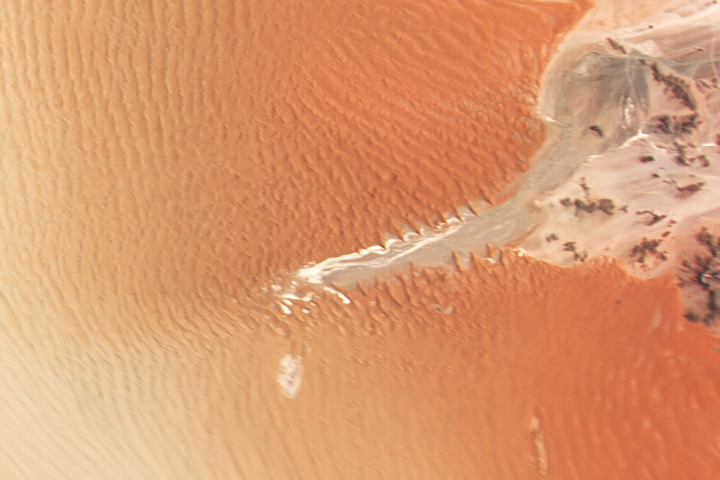