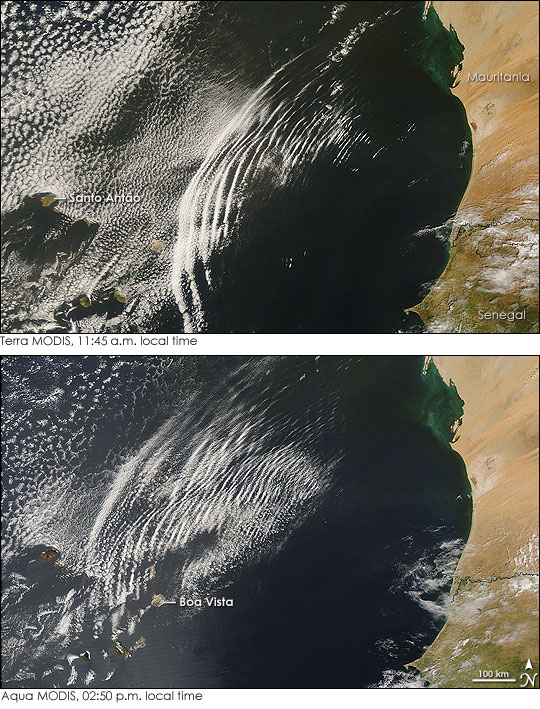 Like ripples on a pond, a series of long, circular wave clouds radiate out from the coast of West Africa in this pair of photo-like images. The images were captured by the Moderate Resolution Imaging Spectroradiometer (MODIS) on NASA’s Terra (top) and Aqua (bottom) satellites on October 9, 2007. Called an undular bore or solitary wave, this cloud formation was created in the interaction between the cool, dry air coming out of Africa with a stable layer of warm, moist air over the Atlantic Ocean.

A moving air mass over Africa pushed a wave of fast-moving dry air ahead of it like a mound of water moving ahead of a boat in calm water. The wave of dry air pushed west until it met with a wall of warm, moist air over the Atlantic Ocean. The meeting of the two air masses is visible in the cloud patterns shown in the image. To the west of the wave clouds is a layer of relatively evenly spaced marine clouds. Behind the wave clouds (east), the dry air is almost cloud-free. The clash between the two air masses is evident in the wave clouds.

When the two air masses met, the dry air pushed the moist air up. The moist air rose, cooled at the peak of the wave, fell again, and then rose to a slightly lower peak, and so forth, until the wave dissipated. Clouds formed at the high-altitude peaks of the waves, with the most defined cloud at the front of the group, where the initial wave formed, followed by increasingly less-defined lines of cloud. These undulating waves traveled ahead of the boundary between the two air masses into the layer of stable moist air. The distinctness of the wave clouds in the top image indicates that the moist air transmitted the waves well, without dampening the waves or allowing the energy that created them to dissipate.

The line of wave clouds moved quickly across the sky. At 11:45 a.m., when Terra MODIS captured the top image, the front line of clouds was approaching the easternmost of the Cape Verde Islands, Boa Vista. A little more than three hours later, when Aqua MODIS captured the lower image, the front cloud was nearly to Santo Antão, roughly 200 kilometers west of its earlier position. The fast-moving clouds had been disrupted by the islands. In the lee of the islands, the air that had split around or over land came back together, creating a braid of curling eddies in the clouds. The turbulence created when the wave front encountered the islands, particularly Boa Vista, also carved a gouge in the neat curve of wave clouds. Each line of clouds in the undular bore was also a little more diffuse than it had been earlier in the day, an indication that the wave and the resulting cloud pattern were beginning to break up.

The large images provided above have a resolution of 250 meters per pixel. Both the Terra image and the Aqua image are available from the MODIS Rapid Response System in a variety of resolutions.