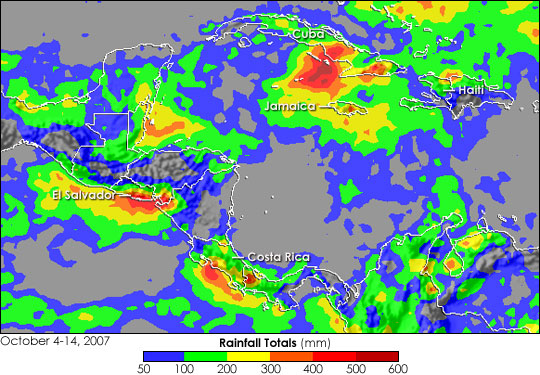 During the first week and a half of October 2007, frequent heavy rains spawned by a persistent trough of low pressure stretched across the northwestern Caribbean, leading to floods and mudslides in several countries. The torrential rains were responsible for at least 47 fatalities in Haiti in villages north of the capital, said the AFP wire service on October 14. The poor island nation is especially vulnerable to mudslides due to deforestation in its mountainous regions. Cuba reported a 24-hour rainfall total as high as 306 millimeters (about 12 inches). The same weather pattern also impacted Jamaica and Central America. According to Reuters, a rain-induced landslide in Costa Rica buried 14 people, and at least 20 people had died across Central America as of October 14.

This image shows the heavy rainfall as observed by the near-real-time, Multi-satellite Precipitation Analysis (MPA). Based on measurements taken by Tropical Rainfall Measuring Mission (TRMM) satellite, the MPA is used to monitor rainfall over the global tropics. The rainfall totals shown here are from October 4 through October 14, 2007. The highest rainfall totals for the period (shown in red) are located right along and just off the southern coast of Cuba, and they are around 400 to 500 millimeters (about 16 to 20 inches). Haiti received at least 100 mm (about 4 inches) of rain, shown in green. Jamaica, Costa Rica, and El Salvador also received substantial amounts of rain.