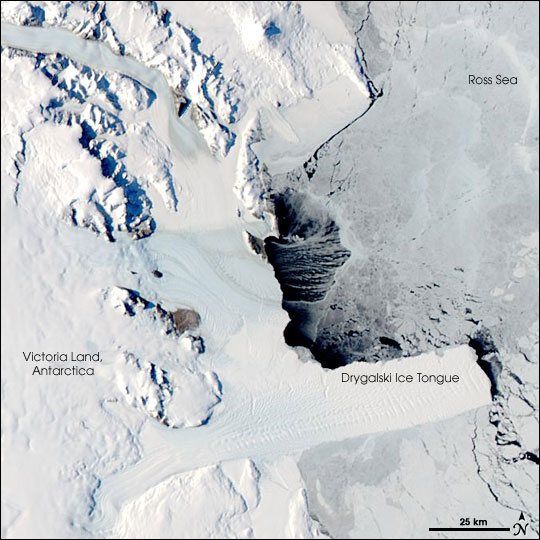 In Terra Nova Bay, off the Scott Coast of Victoria Land, Antarctica, a large pocket of open water persists throughout most of the Southern Hemisphere winter, even while most of the rest of the Antarctic coastline is firmly embraced by the frozen Southern Ocean. This pocket of open water—a polynya—results from exceptionally strong winds that blow downslope from the Trans-Antarctic Mountains. These fierce katabatic winds drive the sea ice eastward. Since the dominant ice drift pattern in the area is northward, the Drygalski Ice Tongue prevents the bay from being re-populated with sea ice.

This image of the Terra Nova Bay polynya was captured by the Moderate Resolution Imaging Spectroradiometer (MODIS) on NASA’s Aqua satellite on October 16, 2007. Sea ice sits over the Ross Sea like a cracked and crumbling windshield. Blue-tinged glaciers flow down from the Trans-Antarctic Mountains. Although glaciers can appear blue because of melt water, they can also get that tint when the wind scours and polishes the ice surface. Given the strength of the katabatic winds along this part of the Antarctic coast, it is likely that the blue color of these glaciers is a result of their having been swept clean of snow.

The large image provided above has a spatial resolution (level of detail) of 250 meters per pixel. The MODIS Rapid Response Team provides twice-daily images of the region in additional resolutions and formats, including a false-color version that enhances the contrast between ice and clouds.

In Terra Nova Bay, off the Scott Coast of Victoria Land, Antarctica, a large pocket of open water persists throughout most of the Southern Hemisphere winter, even while most of the rest of the Antarctic coastline is firmly embraced by the frozen Southern Ocean.

The scene provides a glimpse of the persistent and fierce downslope winds that blow from the interior of the Antarctic ice sheet toward the coast.