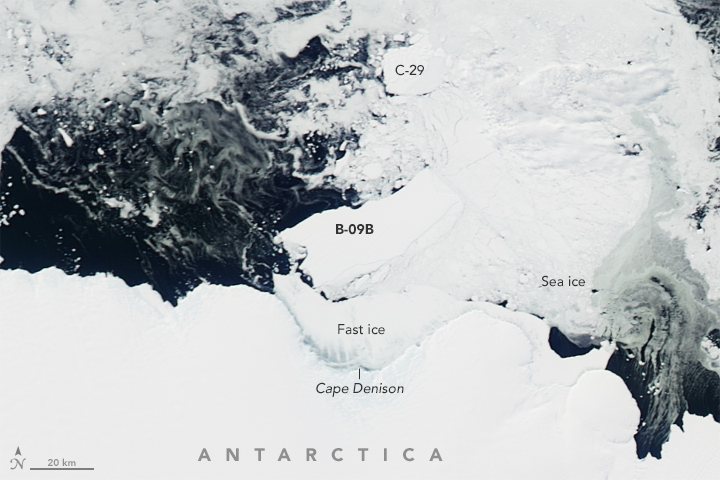 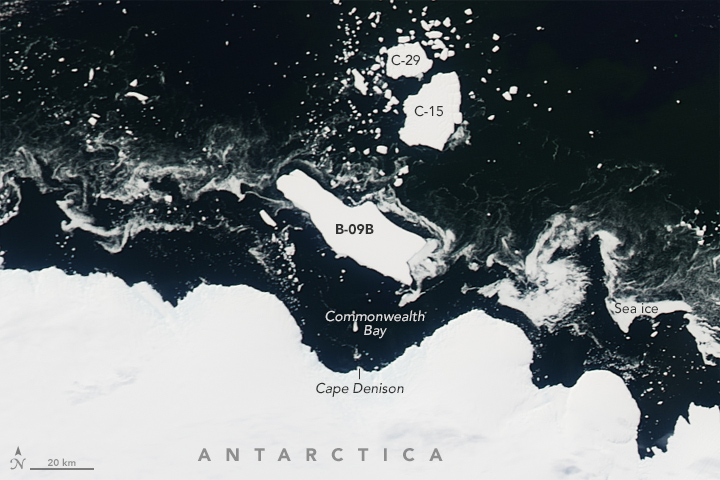 Iceberg B-09B is on the move again. For several years, the 50-kilometer-long ice island jammed up a bay in East Antarctica and created desperate times for a colony of penguins. Now it is back to drifting in the Southern Ocean.

B-09B is a remnant of B-09, which broke off from the Ross Ice Shelf in the late 1980s. By 1993, B-09B became grounded in the Wilkesland Sea, near the Mertz ice shelf. But the berg’s journey around East Antarctica continued, and the remnant ice pummeled the floating snout of Mertz Glacier in February 2010. The collision created a new, large berg and B-09B again came to a halt by the end of the 2010. It parked in Commonwealth Bay off East Antarctica and stayed put.

Across more than five years, Commonwealth Bay transformed from frequently open water to an area with year-round sea ice. The collection of icebergs north of the bay—primarily B-09B, but also others including C-15 and C-29—blocked sea ice from drifting westward with the ocean currents. As a result, fast ice accumulated in the bay, growing as much as 3 meters thick. A colony of Adélie penguins that had once lived near the water’s edge at Cape Denison suddenly had to shuffle 60 kilometers to find open water and food. Without enough food to raise their chicks, the colony’s population plummeted.

The bay was transformed again in February 2016. Sea ice in the bay broke up, providing access to Cape Denison for the first time in six years. The image pair above, acquired with the Moderate Resolution Imaging Spectroradiometer (MODIS) on NASA’s Aqua satellite, show the region on February 18, 2013, and February 18, 2016. Turn on the image comparison tool to see the berg change position and the bay lose its fast ice.

Jan Lieser, a senior sea-ice analyst at the Antarctic Climate & Ecosystems Cooperative Research Center, spotted the complete breakout of ice from the bay. “My interest and job is to monitor sea ice developments around Antarctica, with a special focus on East Antarctica, as this is where most of the Australian activities take place,” Lieser said. “Commonwealth Bay is of particular Australian interest as it is the home of Mawson’s Huts, the first Australian Antarctic dwellings.”

Lieser suspected that the breakup occurred on February 14, 2016, but cloud cover prevented a clear view. “The very next day the clouds cleared and I was able to get confirmation of the new situation.”

Researchers including Lieser are working to figure out what caused the breakup. Observations show that in October 2015, a large (250-square kilometer) piece of ice broke away from iceberg B-09B. “This, and probably a nudge by C-15 at the other end, allowed the remains of B-09B to turn about 45 degrees clockwise,” Lieser said. “This movement opened a ‘gate’ for sea ice to be transported more easily out of Commonwealth Bay toward the northwest.”

Waves and wind might have allowed for the breakup of ice in the first place—the katabatic wind at Cape Denison is famous. But the new exit path toward the northwest made it easier for the broken bits to escape.

It is too soon to say what the breakup means for the penguins. “This is one of many penguin colonies in the region located close to Cape Denison,” Lieser said. “I’m not a biologist, but I hear from my colleagues at the Australian Antarctic Division that these colonies have good years and bad years. Sometimes they have a successful breeding season despite some fast ice extent; sometimes they have zero breeding success for other reasons.”