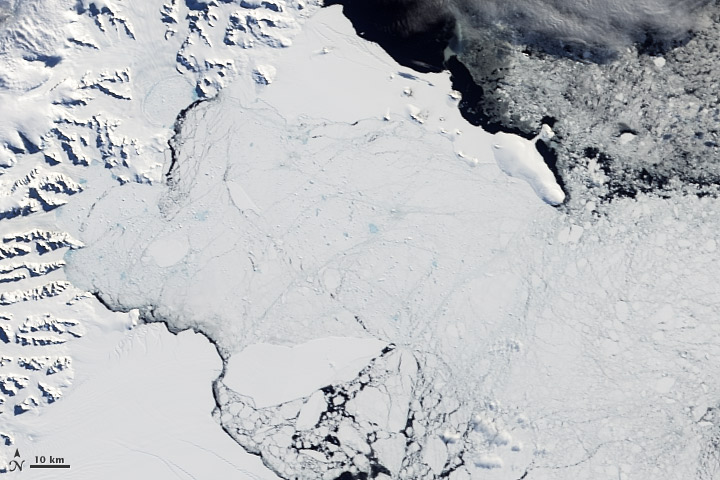 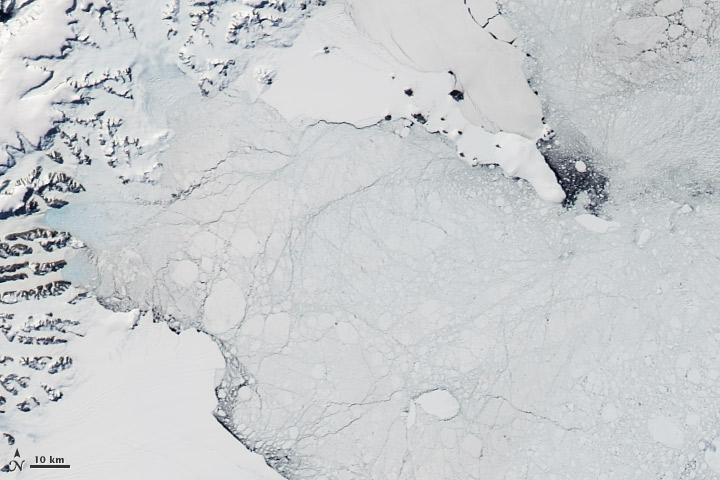 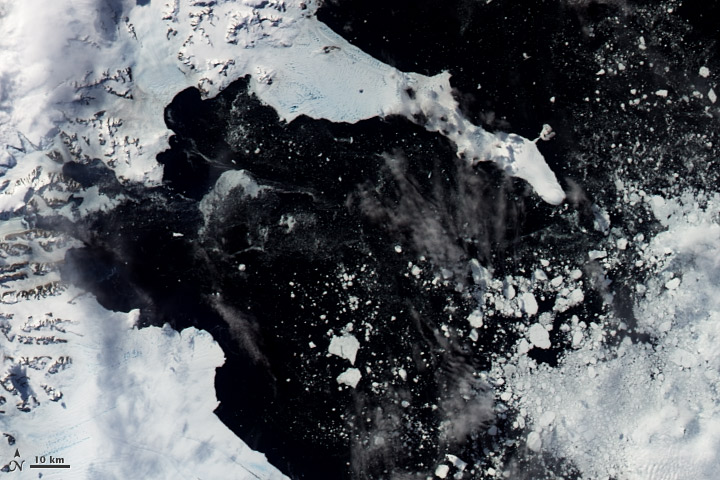 Some of the world’s largest ice shelves occur in Antarctica, and in early 2002, one such shelf—the Larsen B Ice Shelf on the Antarctic Peninsula—shattered. Ice core studies suggested that the Larsen B had remained stable for 12,000 years, but within just five weeks, approximately 3,250 square kilometers (1,250 square miles) of the shelf rapidly transformed into toppled blocks of ice and slushy mélange.

The ice fragments did not exit the bay immediately; accumulated snow and sea ice kept some of the debris frozen in place for two summers. The Moderate Resolution Imaging Spectroradiometer (MODIS) on NASA’s Terra and Aqua satellites captured these images in the years following the collapse.

Terra acquired the top image on March 20, 2003, one year after the disintegration. Although not frozen solid, the bay is filled with mélange and icebergs, some of them tens of kilometers long. A thin corridor of open ocean, however, lines much of the remaining ice shelf.

Aqua acquired the middle image on February 11, 2004. Ice continues to fill the bay, and even more ice appears in this image than is visible in the 2003 shot. Lingering mélange (small chunks of glacier ice and snow, sometimes mixed with sea ice) and icebergs have likely been supplemented by snow and sea ice.

Aqua acquired the bottom image on February 18, 2005. The difference between this picture and earlier shots is dramatic. Most of the ice that had lingered in the bay after the Larsen B’s collapse has drifted out to sea, and open ocean predominates. Isolated chunks of ice float on the sea surface far from the remaining edge of the shelf.

Many, though not all, ice shelves are fed by glaciers, and in the wake of the Larsen B collapse, several glaciers feeding this shelf accelerated, thinned, and retreated. The shelf’s collapse had other impacts. Whereas pale ice reflects most sunlight back into space, dark ocean water absorbs most sunlight. The sun-warmed water attracts algae and plankton. The waste and remains of these organisms settle to the ocean floor, changing the composition of sea-floor sediments, and attracting bottom-dwelling scavengers.

In 2005, Eugene Domack of Hamilton College published a study describing a chemotrophic ecosystem under the former Larsen B Ice Shelf. A chemotrophic ecosystem is one in which organisms derive their primary energy from chemical reactions rather than photosynthesis. Evidence for this ecosystem included microbial mats and clam beds lining a glacial trough on the sea floor not far from the ice shelf edge. The ice shelf’s retreat, however, led to increased transport of sediments to the sea floor. Within three years of the Larsen B collapse, the microbial mats’ extents had shrunk significantly, and the ecosystem’s future was uncertain.

The dispersal of the Larsen B Ice Shelf remnants in 2005 did not mean that the bay would be ice-free every austral summer. MODIS observations in February 2010, for instance, showed the bay filled with ice. Growth of sea ice, however, does not replace a lost shelf. An ice shelf is typically 250 meters (820 feet) thick, but sea ice can be just 1 to 2 meters (3 to 7 feet) thick. This thin sea ice does nothing to stem the acceleration of glaciers, nor does it prevent sediment accumulating onto the sea floor.

NASA images by Jesse Allen and Robert Simmon, based on MODIS data. Caption by Michon Scott, based on image interpretation by Ted Scambos, National Snow and Ice Data Center.