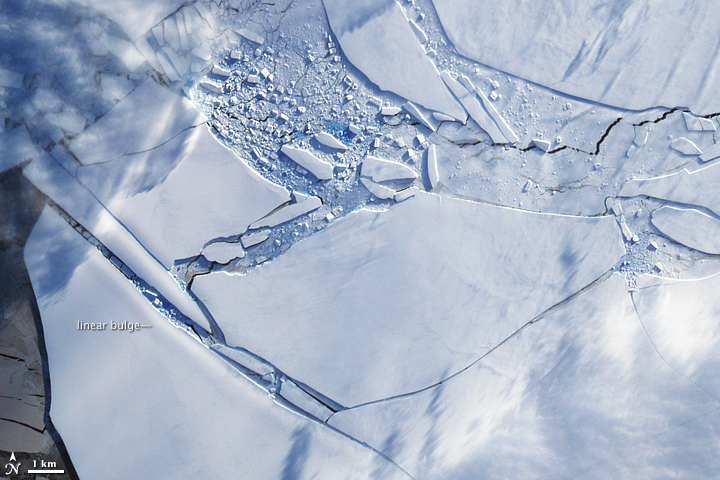 The Wilkins Ice Shelf, on the western side of the Antarctic Peninsula, experienced multiple disintegration events in 2008. A rapid retreat started in February, near the end of the Antarctic summer. Another breakup began in May, during the Antarctic winter. And fresh cracks appeared on the shelf in late November 2008. By the beginning of 2009, a narrow ice bridge was all that remained to connect the ice shelf to ice fragments fringing nearby Charcot Island. That bridge gave way in early April 2009.

Days after the ice bridge rupture, on April 12, 2009, the Advanced Spaceborne Thermal Emission and Reflection Radiometer (ASTER) on NASA’s Terra satellite captured this image of the southern base of the ice bridge, where it connected with the remnant ice shelf. This image shows ice fragments of varying sizes mixed with ice mélange. A crack in the east reveals dark ocean water below. Although the ice bridge between the shelf and Charcot Island had played a role in stabilizing the ice fragments in the region, its rupture didn’t guarantee an immediate ice exodus. The Wilkins Ice Shelf experienced a breakup event in 1998, yet the ice blocks from that breakup froze in place for a decade.

In this image, the low angle of the Sun accentuates shadows, and highlights an interesting feature. The large slab of ice in the lower left corner of this image displays a slight linear bulge along its northeastern edge. This area of raised ice is consistent with ice shelf modeling in numerous studies.

An ice shelf is a thick slab of ice that is attached to a coastline. The seaward extension of the shelf floats on the water like sea ice. Unlike sea ice, however, ice shelves can have thicknesses in excess of 100 meters, with part of the ice front above water and part of it below. After part of an ice shelf breaks away, the remaining ice shelf, despite its thickness, doesn’t remain impervious to the change. In both ice and water, pressure increases with depth, but the pressure gradient is steeper in water. This means that ocean water tends to deform the ice, pushing inward on the ice slab’s front. On its top surface, the ice slab bulges, and its top edge rotates outward and downward. The raised area along the front of the ice slab in this image suggests that ocean water has deformed this ice slab as predicted.