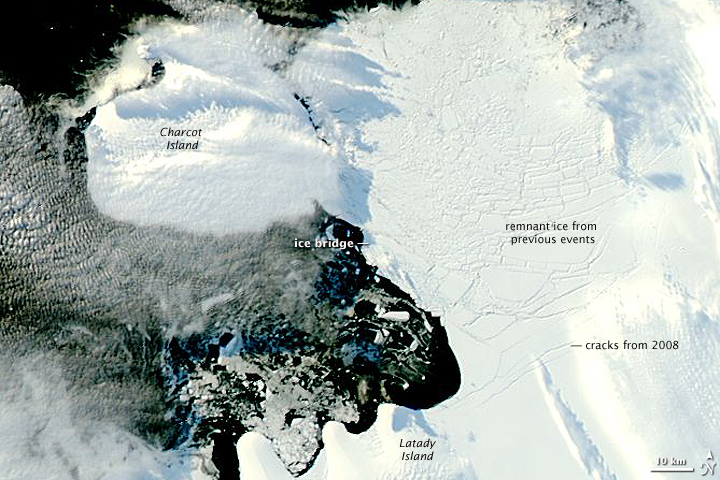 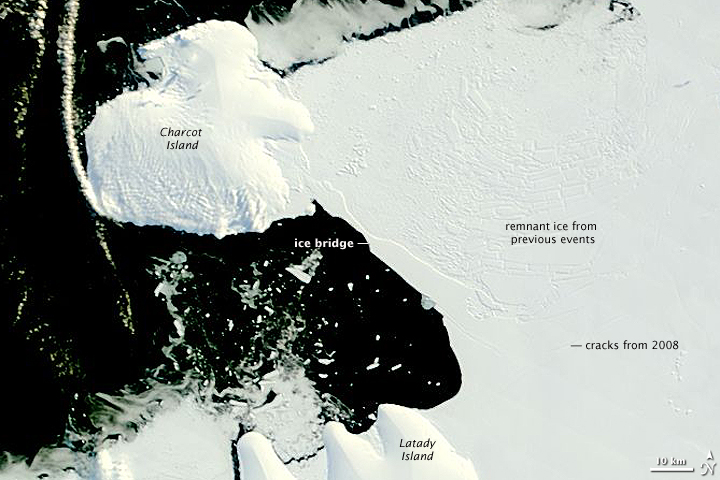 In the lower image, taken by the MODIS instrument on NASA’s Terra satellite on March 31, 2009, the ice bridge was still intact. The ice appears to be smooth, an unbroken surface. Less than a week later, late on April 6, the MODIS instrument on NASA’s Aqua satellite captured the top image. The smooth bridge is gone, replaced by chunks of ice. The breakup was initially observed in radar imagery by the European Space Agency.

The pieces of the former ice bridge join multiple other chunks of ice formed as the northern portion of the ice shelf broke apart throughout the previous decade. The broken pieces of the shelf have remained frozen in place since 1998, but now that the ice bridge no longer provides a barrier, the remnants of the ice shelf may flow out into the Southern Ocean. A careful comparison of the two images reveals that some of the ice nearest the bridge shifted between March 31 and April 6.

Cracks that formed in the ice shelf below and right of the bridge in late 2008 expanded after the ice bridge broke and the remnant ice nearest the shelf shifted away, says Ted Scambos of the National Snow and Ice Data Center. These changes are emphasized by differences in light between the two images. The Sun was low in the sky on April 6. The clouds cast long shadows on the ice beneath. By contrast, the Sun was relatively high, and the light more direct on March 31. Fewer shadows outline the topography on March 31. The low Sun angle highlights cracks in the ice in the April 6 image. The cracks were first seen in radar images collected by the European Space Agency, and were evident on November 26, 2008.

What is the significance of the disintegration of the northern portion of the Wilkins Ice Shelf? The collapse of the ice shelf will not contribute to sea level rise, since the ice had already been floating on the water. When other ice shelves such as the Larsen, have collapsed, they allowed glaciers to pump more ice into the ocean at a faster rate, which did contribute to sea level rise. The Wilkins Ice Shelf, however, does not buttress any major glacier, says Scambos. The Wilkins Ice Shelf is the tenth major ice shelf to collapse in recent times, another sign that warming temperatures are impacting Earth’s fragile cryosphere.