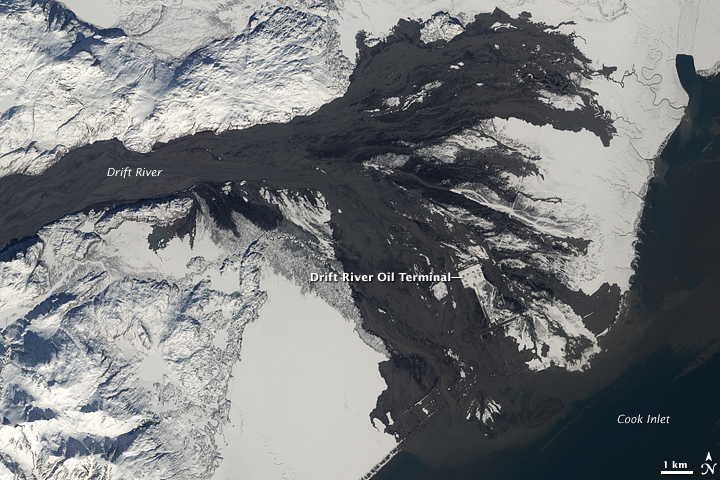 Besides volcanic ash, the eruption of Alaska’s Mount Redoubt posed another hazard in early April 2009. The volcano’s activity sent lahars—muddy volcanic avalanches—through Drift River Valley, according to the Alaska Volcano Observatory. Because an oil storage facility, the Drift River Oil Terminal, is located in the river valley, a catastrophic lahar could have caused an oil spill.

On April 4, 2009, the Advanced Land Imager (ALI) on NASA’s Earth Observing-1 satellite captured this image of the Drift River Valley where it connects with Cook Inlet. Lahars have stained the river valley a deep muddy brown. Water channels form branching patterns just west of the Cook Inlet shore, and the dark brown color of each water channel contrasts sharply with the nearby snow. The Drift River Oil Terminal resides in this network of channels, and part of the facility appears as an off-white rectangle in a landscape of meandering mudflows. The same day that ALI acquired this image, the Alaska Volcano Observatory reported that a lahar had developed in the Drift River Valley, as indicated by seismometer readings. Lahars had also been recorded in the Drift River Valley during the previous weeks.

On April 6, 2009, the tanker Seabulk Arctic carried 3.7 million gallons of crude oil away from the Drift River Oil Terminal, reducing the risk of a massive oil spill. (On March 22, 2009, at the beginning of Mount Redoubt’s period of unrest, the facility contained 6.2 million gallons of oil.) A lahar struck the area on March 23, but a dike built in 1990 kept the facility’s oil tanks dry.

Lahars from Alaska’s Mt. Redoubt Volcano pass close to the Drift River Oil Terminal in an image acquired on April 4, 2009.

Image of the Day Land Water Volcanoes Snow and Ice

On July 14, 2010, a silvery gray patch of oil stretched across the Gulf of Mexico about 80 kilometers (50 miles) southeast of the tip of the Mississippi River Delta.