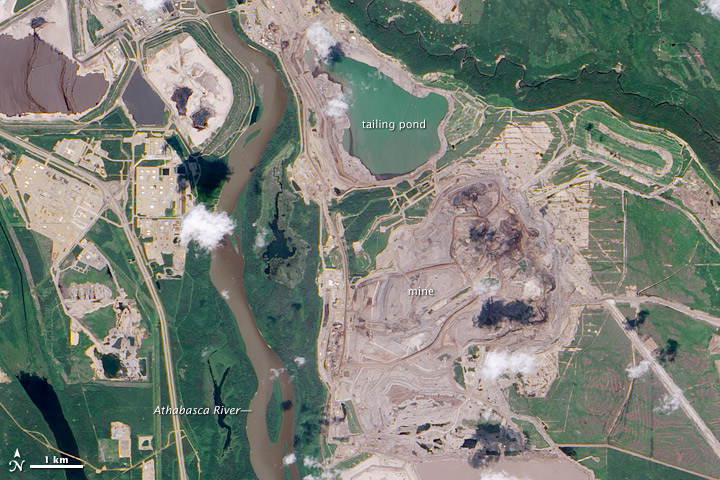 Oil sands consist of sand coated in water and a sticky film of bitumen, a heavy oil. The bitumen can be rinsed from the sand and refined into fuels. In some cases, the bitumen-encased sand can be pumped from wells like standard oil, but in Athabasca, the sands are at or near the surface. Here, oil companies scoop the sand from the surface after stripping off overlying vegetation and top soil. The result is illustrated in this true-color image. Earthy open-pit mines and muddy tailing ponds replaced the dark green boreal forest. The Advanced Land Imager on NASA’s EO-1 satellite acquired the image on July 29, 2009.

The mines follow the course of the Athabasca River, the dark brown ribbon of water that runs down the center of the image. The river is essential to the operation. Over the course of its very long lifetime, the river has eroded through the sediment that once covered the oil deposit, gradually bringing it close to the surface. Without the river, the oil sands would likely be buried beneath a thick layer of earth.

The river is also key to the mining process. To separate the bitumen from the sand, refineries bathe the sands in hot water. The contaminated water cannot be returned to the Athabasca River, from which it was drawn, and it ends up in tailing ponds, visible in the image. The tailing ponds are one of the environmental risks of these mines. The ponds replace natural wetlands and because they contain toxic chemicals, they are a threat to wildlife. In April 2008, hundreds of migrating ducks died after landing on a tailing pond, said news reports. Local residents worry that the toxic water may be leaking into the ground water or the Athabasca River, which, as the image illustrates, is very near many of the ponds.