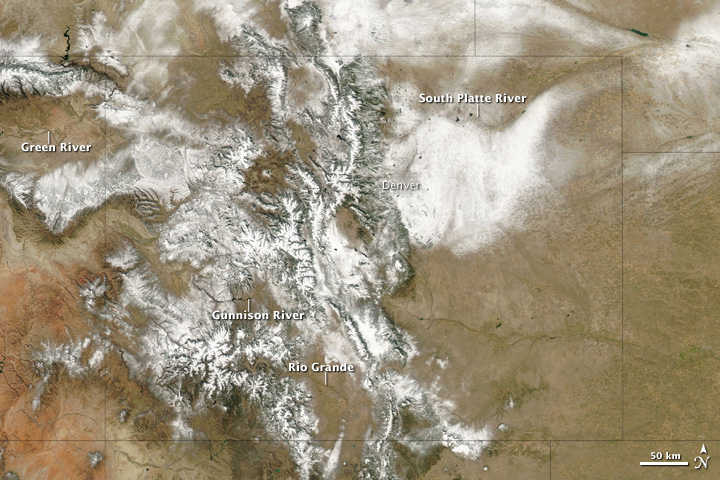 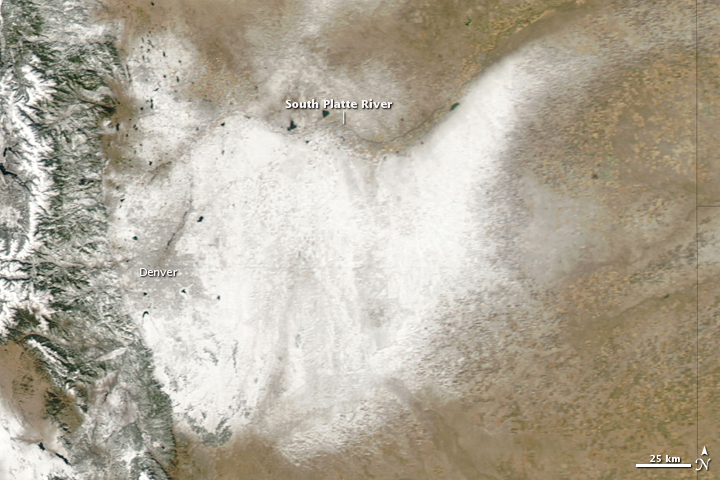 The first big snowstorm of the season hit Colorado in the last week of October 2009. Hundreds of flights were canceled at Denver International Airport, and interstate highways leading from Denver to Kansas, Nebraska, and Wyoming were closed due to blizzard conditions. Some locations in Colorado, Utah, and Wyoming received several feet of snow.

Sunny skies on October 31, 2009, allowed the Moderate Resolution Imaging Spectroradiometer (MODIS) on NASA’s Aqua satellite to capture this view of the whitened landscape. Snow highlights the rugged mountains as well as the urban and agricultural landscapes of the plains. The top image is a regional view and the bottom image is a close-up of the snow contouring the South Platte River in northeastern Colorado.

Snow accumulation during a single event can vary considerably from place to place depending on whether a location is upslope (more snow) or downslope (less snow) with respect to the storm’s prevailing winds. During this event, winds were predominantly from the north. Air moving southward from the Wyoming-Colorado border blew downslope toward the South Platte River Valley, and it dropped less snow. On the far side of the river, however, the terrain rises and as the air climbed upslope, heavier snow fell. The difference in snow totals occurs because air that is descending generally warms and dries. Air that is forced to rise over elevated topography cools, and more water vapor condenses into rain or snow.

This pattern of heavy snow in upslope (north-facing) areas and less in downslope areas is repeated across the state, most obviously in river valleys oriented in an east-west direction, including the Gunnison and Rio Grande Valleys in Colorado and the Green River Valley in Utah. The National Weather Service’s Denver office provides a description of the weather conditions leading to this event.

The mountains and plains of Colorado were blanketed with snow on October 3, 2009, after the season’s first blizzard.