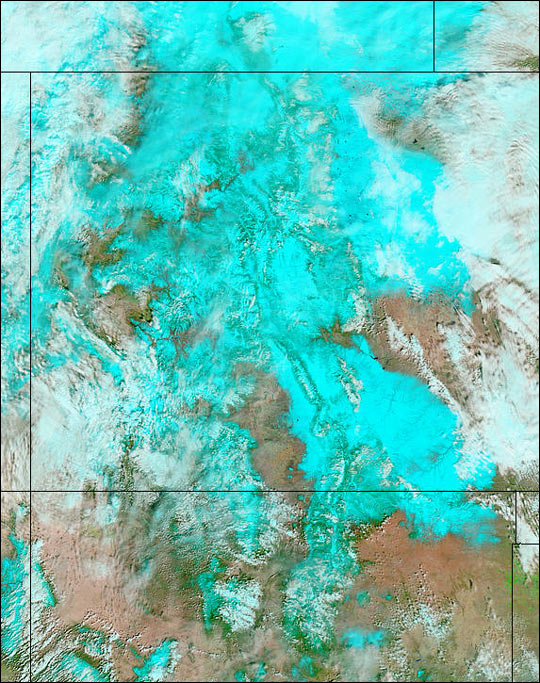 Parts of Colorado and Wyoming were engulfed in a record-setting blizzard between March 18 and 19, 2003. The Rocky Mountains were hammered with as much as 87 inches (7.25 feet) of snow in places, and Denver received about 30 inches, which shut down the airport and stranded motorists. Several people lost their lives in snow-related accidents, and more than one hundred roofs collapsed in Denver from the weight of the heavy, wet snow. Avalanche danger skyrocketed, and an avalanche blocked the road to a mountain ski resort, forcing guests and employees to sleep overnight on floors. The danger was too high for them to venture out onto the slopes.

This false-color Moderate Resolution Imaging Spectroradiometer (MODIS) image shows the skies clearing over Colorado and Wyoming on Thursday afternoon at the time of the Terra satellite overpass. In the image, snow on the ground is bright blue, liquid water clouds are white, vegetation is green, naturally bare ground is tan, and water is deep blue. The blanket of snow softens the sharp peaks of the Rockies that are normally visible.

The storm left behind a blanket of snow that stretched from Wyoming and Nebraska (top left and right), through Colorado (center), and down into the peaks of New Mexico’s Sangre de Cristo Mountains in the north-central part of the state. In Colorado, the snow reached well out into the plains. In a state desperate for water, the huge snowfall should provide some relief. However, with temperatures expected rise rapidly by the weekend in places like Denver, residents in the lower elevations must prepare themselves for flooding after what is being reported as the worst blizzard in the last century.