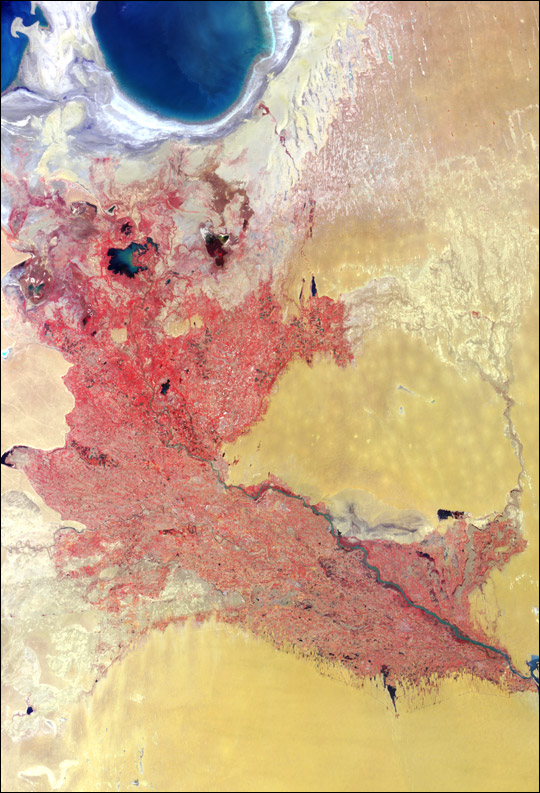 Here’s another chance to play geographical detective! This false-color image was acquired by the Multi-angle Imaging SpectroRadiometer (MISR) in late June 2002, and represents an area of about 292 kilometers x 370 kilometers. Data from the near-infrared, red, and blue spectral bands of MISR’s downward-viewing (nadir) camera are displayed as red, green, and blue, respectively, causing highly vegetated areas to appear red.

Use any reference materials you like to answer the following three questions regarding prominent features within this landscape:

1. Three of the following four statements about the two countries contained with image area are true. Which one is false?
(A) They are among the world’s top cotton producers.
(B) One celebrates Independence Day in March; the other in April.
(C) They are both landlocked.
(D) Soil in both countries has been subjected to increasing salinization.

2. Three of the following four statements about the large water bodies in the upper lefthand corner of the image are false. Which one is true?
(A) Increasing agricultural demands caused a 75% drop in water volume during the last few decades.
(B) Water volume increased by about 15% in the last decade due to a change in the availability of glacial meltwater.
(C) Increased commercial fishing in these waters over the past few decades has led to economic growth in the region.
(D) These freshwater bodies provided the setting for an international athletic competition held in the mid 1990s.

3. Three of the following four statements about the major river system that diagonally traverses the image area are true. Which one is false?
(A) Parts of the river demarcate international political boundaries.
(B) The total number of fish species supported by the river system has decreased since the middle of the 20th century.
(C) The direction of water flow is from the upper left portion of the image toward the lower right.
(D) The river changed its course during the 17th century, prompting a city within the image area to relocate and re-build closer to the new riverbed.

E-mail your answers, name (initials are acceptable if you prefer), and your hometown by Tuesday, March 25, to suggestions@mail-misr.jpl.nasa.gov.

Answers will be published on the MISR web site in conjunction with the next weekly image release. The names and home towns of respondents who answer all questions correctly by the deadline will also be published in the order responses were received. The first three people on this list who are not affiliated with NASA, JPL, or MISR and who have not previously won a prize will be sent a print of the image.

A new “Where on Earth...?” mystery appears as the MISR “Image of the Week” approximately once every two months. A new image of the week is released every Wednesday at noon Pacific time on the MISR home page.