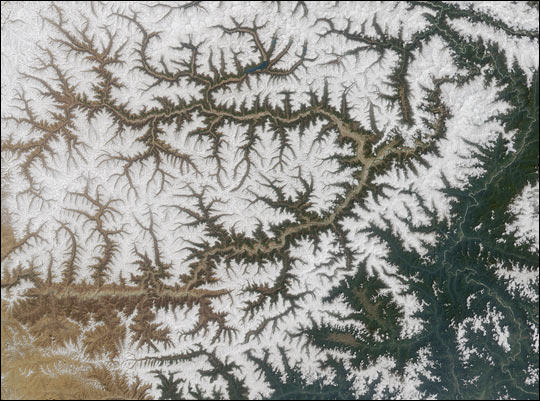 A large river flows from the left side of the image, below center, and traverses the image, angling northeast toward the upper right. It then makes a hairpin turn and continues to flow in a generally southward direction near the right-hand side of the image.

Below are eight statements about this river, only some of which are true. Use any reference materials you like, and mark each statement true or false:

Quiz Rules
E-mail your answers, name (initials are acceptable if you prefer), and your hometown by Tuesday, May 21, 2002 to suggestions@mail-misr.jpl.nasa.gov.

Answers will be published on the MISR web site (http://www-misr.jpl.nasa.gov/) in conjunction with the next weekly image release. The names and home towns of respondents who answer all questions correctly by the deadline will also be published in the order responses were received. The first 3 people on this list who are not affiliated with NASA, JPL, or MISR and who did not win a prize in the last quiz will be sent a print of the image.

A new “Where on Earth...?” mystery appears as the MISR “image of the week” approximately once per month. A new image of the week is released every Wednesday at noon Pacific time on the MISR home page. The image also appears on the Atmospheric Sciences Data Center home page, though usually with a several-hour delay.