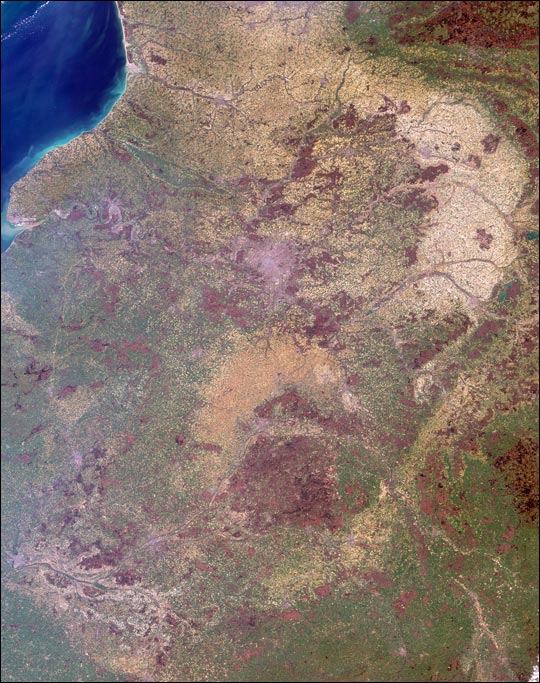 Here’s another chance to play geographical detective! This natural-color image from the Multi-angle Imaging SpectroRadiometer (MISR) represents an area of about 368 kilometers x 465 kilometers, and was captured by the instrument’s vertical-viewing (nadir) camera in March, 2004. Use any reference materials you like and answer the following 5 questions:

1. The soils in the prominent pale tan area in the upper right are derived from marine fossil sediments that accumulated there over two million years ago. Partly because of its well-drained, chalky soils, this region is renowned for a particular agricultural product. What is that product?

2. The large river apparent just above image center traverses agricultural, urban, pastoral and forested lands before emerging at the coast in the upper left. Below are three true statements about water quality in the river now, as compared with 30 years ago, and one false statement. Which one is the false statement?

3. The aforementioned river flows through a city, indicated by the pale purple-gray area above image center. Many of the city’s notable architectural monuments are located along the river. Are the majority of these monuments situated upstream or downstream of the island at the city’s center?

4. There are two wetland areas within the image that have been internationally recognized for their significance. Two of these statements are true for one wetland and the other two are true for the other wetland. In which combination (AB-CD, AC-BD or BC-AD) should the statements be paired?

5. Two clusters of very dark brown pixels surrounded by green, are apparent in the top right-hand corner and at the right-hand edge toward the bottom. Which of the following best describes both of these areas in terms of surface characteristics?

E-mail your answers, name (initials are acceptable if you prefer), and your hometown by the quiz deadline of Tuesday, May 11, 2004, to suggestions@mail-misr.jpl.nasa.gov.

Answers will be published on the MISR web site. The names and home towns of respondents who answer all questions correctly by the deadline will also be published in the order responses were received. The first 3 people on this list who are not affiliated with NASA, JPL, or MISR and who have not previously won a prize will be sent a print of the image.

A new “Where on Earth...?” mystery appears as the MISR “latest featured image” approximately once every two months. New featured images are released on Wednesdays at noon Pacific time on the MISR home page. The image also appears on the Atmospheric Sciences Data Center home pages, though usually with a several-hour delay.